The vast majority of aquatic plants that we are used to dealing with in an aquarium are “secondary aquatic”, that is, in the process of evolution they returned back to the water from the air. In this respect, Types of Aquarium Plants are similar to aquatic mammals (whales and seals): if algae (like fish) never left the water, then higher aquatic plants (like cetaceans) returned to the comfort and coziness of the “cradle of life”, having made a kind of “evolutionary excursion” » outside of it. The return of most higher aquatic plants to the aquatic environment occurred quite recently, from the point of view of paleontology, after the separation of the continents and the formation of most modern biogeographic isolates.

This explains the numerous examples of analogous (as opposed to homologous) development leading to the formation of outwardly surprisingly similar species, belonging botanically to completely different families and even orders. Classical examples are the poorly distinguishable kabomba (por. Lily-flowered) and ambulia (por. Lavender), or saggitaria, one species of which is remarkably similar to Vallisneria, and the other to the dwarf Echinodorus tennelus, and all these plants belong to different families.

All this makes it completely meaningless from the point of view of practical and decorative aquarists to classify aquatic plants in accordance with their botanical taxonomy. In fact, when designing a room reservoir, an aquarist often does not need to know exactly who is in front of him – a dwarf saggitaria or tender echinodorus, monosolenium liverwort or lomariopsis fern, Ludwigia “Cuba” or Eusteralis, if these plants look the same, grow the same and require content of the same conditions. These considerations have led to the fact that in aquarists it is customary (with rare exceptions) not to pay attention to the systematic position of plants, but to divide them into groups in accordance with their appearance, growth characteristics, and the ecological niche occupied in the biotope. Of course, there are exceptions to this rule: for example,

The cycle of reference articles on aquarium plants, which we began to acquaint you with a year ago and will continue in the future, is largely built in accordance with this classification, traditional for practical aquarism. According to it, all aquatic plants are divided into the following groups: 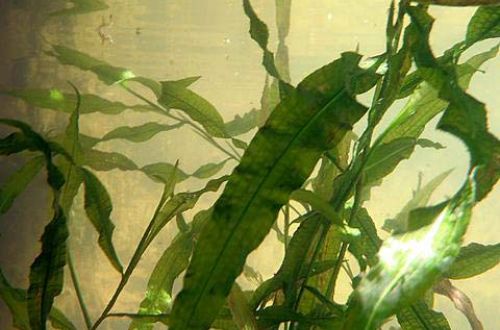 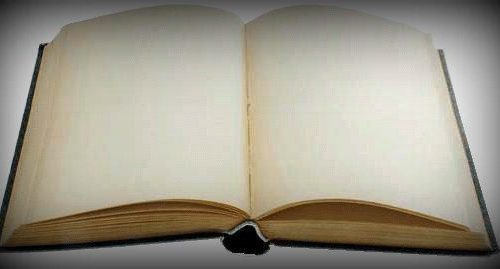 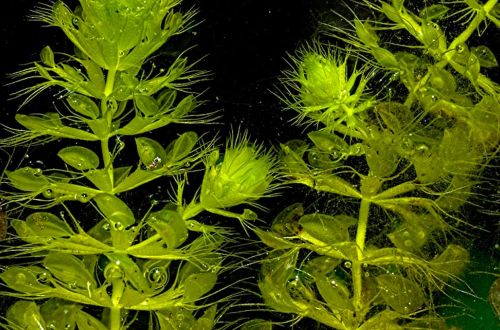 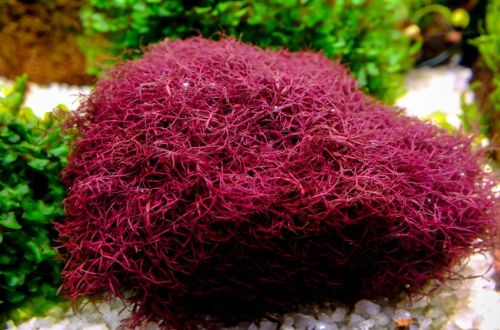 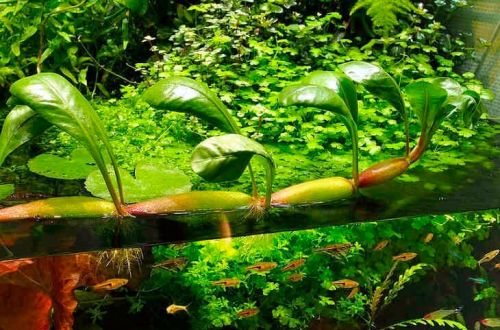 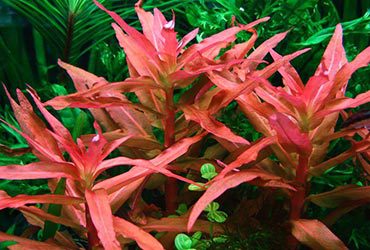 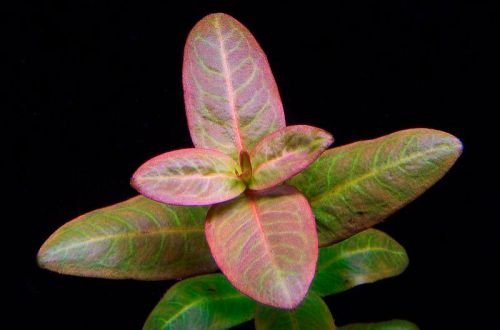 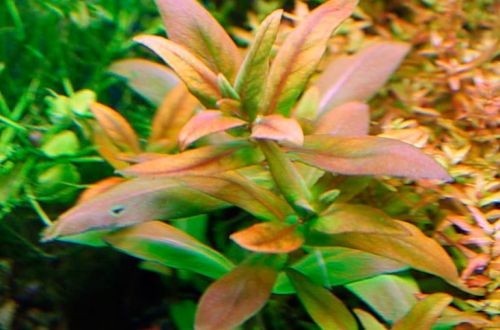 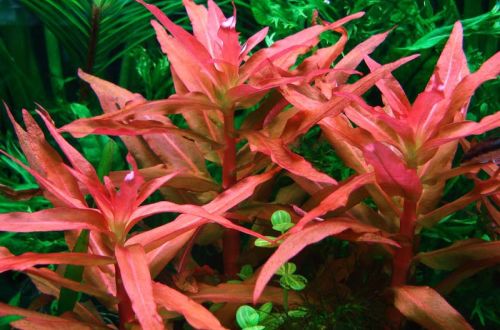 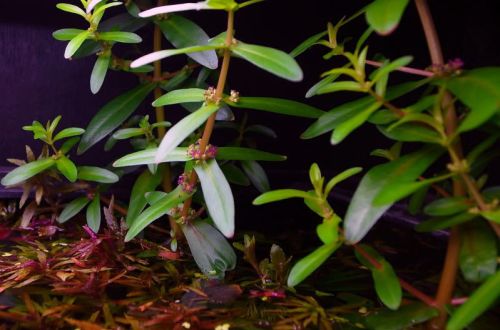 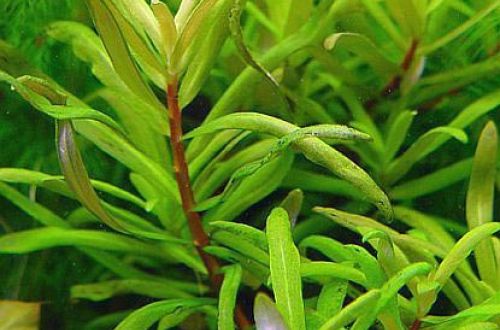 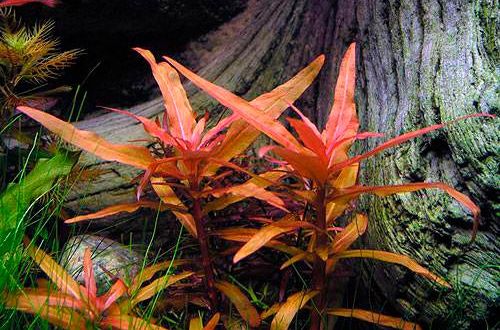 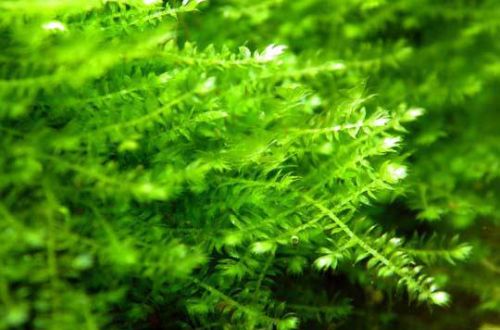 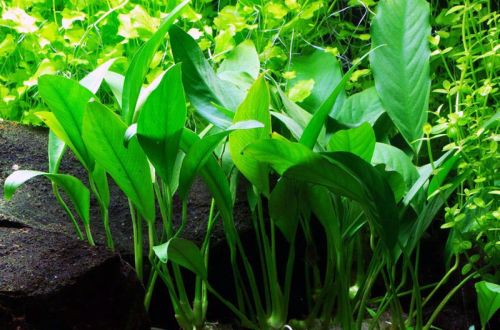 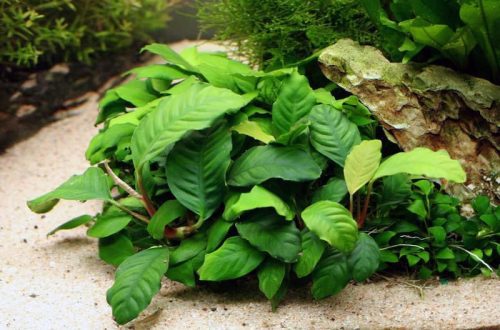 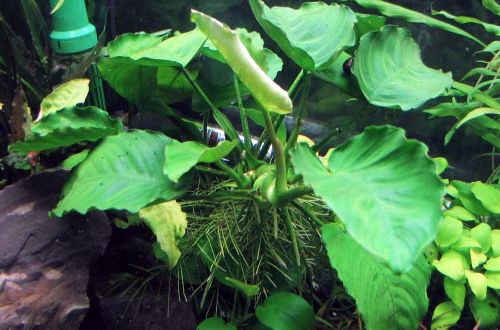 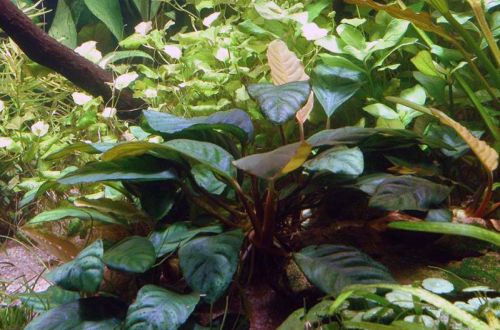 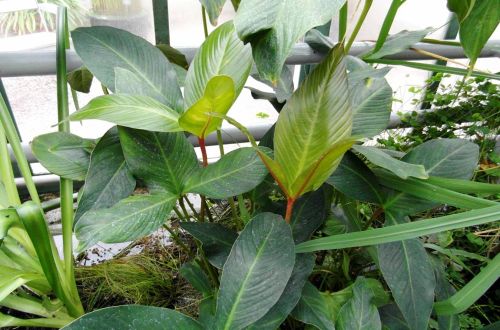 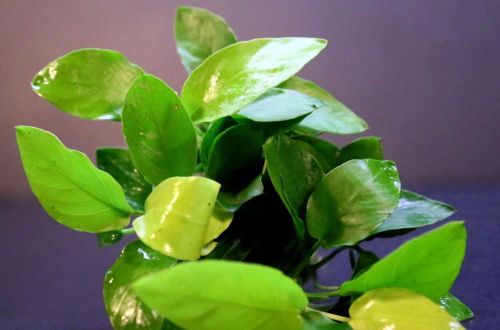 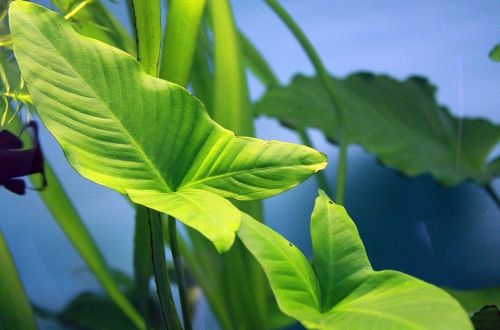 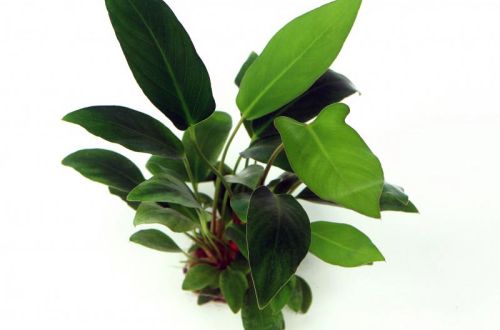 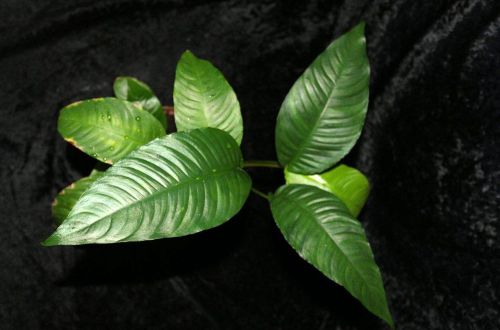 1. Ground cover plants of the foreground

This group includes all small, low-growing aquatic plants that grow along the surface of the soil, and with sufficient nutrition and lighting, do not tend to “jump out” to the surface of the water. Most of the plants of this group are completely aquatic, growing in a completely submerged state for an arbitrarily long time, and some of them do not have an emers (air) form at all. Under good conditions, they form beautiful mats and clearings, which eventually completely cover the ground surface in the foreground of the aquarium, not occupied by other plantsю

2. Rosette and short-rhizome plants of the middle plan

This is the most common and popular group of aquatic plants. Almost all cryptocorynes , echinodorus , nymphs , most anubias , aponogetons , krinums, a number of bucephalandras, etc. can be attributed to it. Plants with large multi-leaf rosettes look great in the central part of the aquarium, attracting attention and structuring the design composition around them. Small-sized plants, as a rule, reproduce well by basal shoots, stolons or rhizome buds, eventually forming attractive attractive groups in the middle plan of the aquarium.

Separately, in the group of rosette plants, one should single out nymphaeal, egg-pod and similar plants, which at a young age form a beautiful rosette of wide wavy underwater leaves, however, at the slightest opportunity, they immediately release floating leaves on long petioles, shading the aquarium, especially numerous before and during flowering. Some of them, according to their “behavior”, can rather be attributed to the 8th group – “Semi-aquatic and coastal plants”, for example, lotuses, which, after floating, release airy, emersed leaves, and only then begin to bloom.

3. Long-leaved rosette plants of the background

Only a few species belong to this group, but they have to be distinguished separately due to the characteristics of biology. These are rosette plants with very long, ribbon-like leaves that quickly reach the surface of the water. Easily propagated by creeping stems-stolons, on which new plants are formed, these species in a short time are able to create a beautiful dense wall in the background of the aquarium, and in the absence of proper care, they can fill half the volume. First of all, these are all types of vallisneria (ordinary, spiral, twist-leaved, giant, etc.), long-leaved types of saggitaria, some types of cryptocorynes and aponogetons.

This is perhaps the most extensive and widespread group of aquatic plants cultivated in aquariums. They are united by their appearance – vertical stems directed to the surface, on which leaves are alternately or oppositely located. The shape of these leaves can be almost anything – from delicate pinnate, like in ambulia and cabomb, to wide “burdocks”, like in hygrophila “nomafila”, from round, like in bacopa, to thin and ribbon-like, like in pogestemon “octopus”, from hard and almost prickly to soft and translucent. The color of the leaves of the long stem is also very diverse – from pale green to maroon. Is it any wonder that it is precisely the numerous and diverse species of long-stemmed plants that are the basis of the oldest and until recently the most popular design style for planted aquariums – the “Dutch”.

A common feature of this group of plants, which is very useful for creating decorative compositions, is their ability to relatively quickly and firmly attach with the help of roots or rhizoids to a complex relief substrate – snags, stones, decorative ceramics – and beautifully overgrow it along the surface. In addition to aquarium mosses, almost all of which have this property, medium-sized species of anubias, the Thai fern, almost all types of Bucephalandra, etc. grow perfectly to snags and stones. Such plants are very common in modern aquaristics, and due to their high decorativeness they are very popular .

6. Plants floating in the water column

There are quite a few such species that have no or almost no roots and are constantly in a free-floating state. First of all, these are all three species of hornworts common in culture, the Guadalupe nyas (or nyas microdon), some types of pemphigus and liverworts, as well as three-lobed duckweed. Usually free-floating plants have a high growth rate and excellent adaptability to changing and adverse conditions, and therefore many of them (for example, hornwort and nyas) are used as starter plants when starting a new aquarium, as well as “healing” plants for green algae outbreaks. : with their rapid growth and active feeding, they are remarkably able to compete with green algae for food resources dissolved in water.

7. Plants floating on the surface of the water

This vast group can be conditionally divided into two subgroups: plants with hydrophilic leaves floating under the surface (limnobiums, duckweeds, riccia, some pemphigus, etc.) and plants with hydrophobic leaves located above the surface (pistia, eichornia, salvinia, and etc.). This division is very conditional: for example, the floating form of the ceratopteris fern can produce both hydrophilic and hydrophobic leaves, while Riccia and pemphigus, which normally float under the surface, grow and rise above the surface of the water into the air. In aquarism, floating plants are used, firstly, for sectional shading of some parts of the aquarium composition (for example, over anubias that do not like strong light), and secondly, as a substrate for spawning of many species of fish. In addition, bunches of roots hanging into the water, for example.

Strictly speaking, most of the plants traditionally grown in an aquarium could be included in this group. Few of them are truly fully aquatic plants, i.e. they cannot go “on land” (rise above the surface of the water) and do not have an emers (air) form (which, by the way, in most plants is radically different from submers, underwater). The transition of secondary aquatic plants to an underwater lifestyle was, as a rule, a form of adaptation to periodic flooding during the change of seasons. A number of coastal biotopes of fresh water bodies are regularly under water for several weeks (or even for several months), and dry up for the rest of the time. Coastal plants (such as anubias, cryptocorynes, echinodorus, etc.) have developed special adaptations that allow them to continue to live and grow as if under water,

However, we do not include them in this group (otherwise it would be necessary to enter a good half of the entire assortment here), but only those plants that live perfectly in a semi-flooded form (“feet in the water, head on land”), but cannot stay for a long time completely underwater. By the way, 100-150 years ago, at the dawn of aquarism, there were a majority of such plants in culture. It is enough to look at old paintings and engravings with aquariums to see that they were mainly decorated with such classic swamps as Cyperus papyrus, Chastuha plantain, calla, arrowhead, various sedges, reeds, cattails, telorez, tradescantia, calamus (acorus) and even wild rice. Today, all these plants are rare in aquarium culture, and are grown mainly by aquapaludarium lovers.

Traditionally, aquatic mosses are classified as a separate group of aquarium plants due to the peculiarities of their biology. Almost all of them, with the help of rhizoids, are attached to the substrate (stones, snags, soil, some even glass!) and form beautiful dense rugs and pillows. Some mosses (fontinalis group) are attached to the stone only by the lower end of the stem (thallus), while the whole plant is in the water column. But most mosses creep along the substrate, turning it. The same group includes liverworts (monosolenium, riccardia, bottom forms of riccia, etc.), as well as Lomariopsis fern, almost indistinguishable from liverworts. Liverworts, unlike mosses, either do not have rhizoids, or form very weak rhizoids that do not hold well to the substrate, but this disadvantage is compensated by the significant specific gravity of the monosolenium thallus, lomariopsis, etc., so that even without attachment they form a wonderful cushion at the bottom. Such curtains look especially impressive when aquatic plants sprout through them – saggitaria and cryptocorynes.

10. Plants not included in any of the groups

Of course, not all plants growing in our aquariums fit into this classification. Nature is always richer and more diverse than our idea of ​​it, and certainly in culture there are species that do not fit into any of the groups.