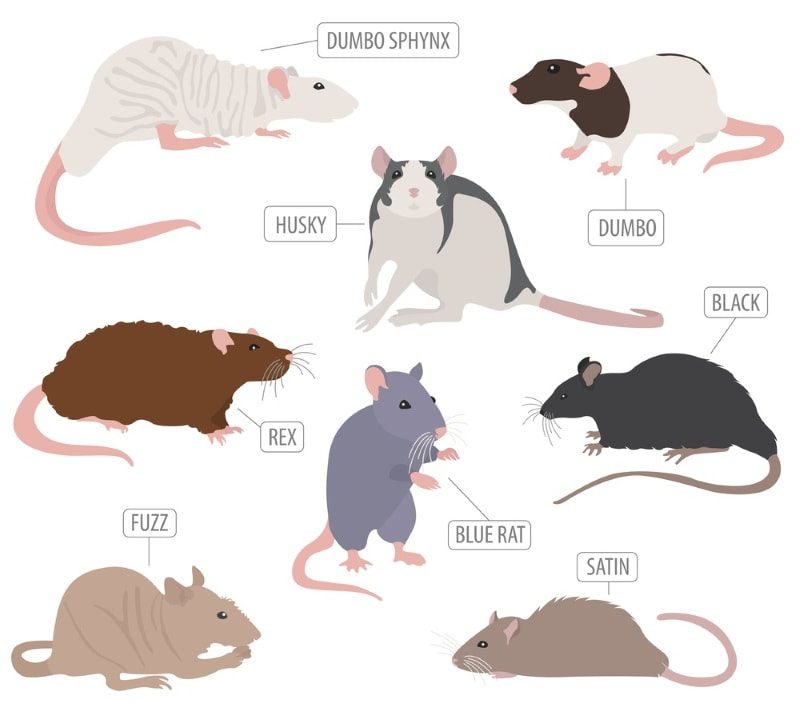 Decorative rodents have been living with humans for a long time. Different breeds of rats, or rather their varieties, differ in the shape of the head and body, the structure of the coat and color. Exotic species require special care as they are more vulnerable. It is worth figuring out what decorative rats are.

Consider the breeds of rats with photographs and names, and make sure that the fixed mutations are very diverse, for every taste.

Types of rats by type of addition

According to the type of addition, 3 types of rats are distinguished. The standard is rodents of a habitual kind. They have an elongated body, they have a long bare tail of about 20 cm. Like wild relatives, such rats can weigh up to 0,5 kg and reach 24 cm in length. Rodents have round ears on the top of their head and an elongated muzzle. The coat of the animals fits snugly to the body, it is smooth and shiny.

Dumbo – another variety differs from the standards with ears. They are located not on the top of the head, but on the sides of the head, like the elephant of the same name in the cartoon. Dumbo’s ears are large and open, with a slight kink in the upper part of the auricle. Due to the location of the ears, the head seems wider. The back of the head of these rodents may be slightly convex. The back of the rat is wider, so the shape of the body may be slightly pear-shaped.

Manx – a rat without a tail – is singled out as a separate species. The tail of the rodent is needed to cool the body and balance. A high proportion of anurans have problems with their hind legs and urogenital system. The birth of cubs is associated with the risk of getting a non-viable litter. Sometimes, under the guise of Manx, sellers slip ordinary rat pups with tails amputated after birth. The body of the tailless rat is not elongated, as in the standards, but in the form of a pear.

Important: The tailless rat is a potential invalid, and self-respecting communities do not seek to support this genetic branch.

Breeds of domestic rats by type of wool

Domestic rodents are also divided according to the type of wool. The fur of animals can be short, long, curly, etc. There are bald pets and rodents, whose fur coat is bald, and this is the norm.

Rats with “Standard” coats are characterized by short, smooth and glossy coats.

Long-haired varieties of rats differ from the standard in longer hair.

Sphinxes must be completely bald. Fluff is allowed on the head, paws and in the inguinal region. Usually rodents have pink skin in a fold, but there are individuals with dark spots. The whiskers of this variety are shorter than those of the standards and may curl.

Keeping such an animal is more difficult than “dressed” relatives. Bare skin is sensitive to changes in temperature and humidity. The defenseless skin can be injured by the claws of the pet itself. By nature, sphinxes are gentle and sensitive, they need contact with their adored owner.

Downy rats look like sphinxes, but the gene for “hairy” rats works there. The skin of the fuzz is covered with down – there are no guard hairs. On the muzzle and underparts of the body, the hairs are longer. Vibrissae are short and twisted. Unlike sphinxes, more “dressed” individuals are valued in downy animals. Fuzzies are more resistant to external factors than sphinxes, they are easier to breed. However, thin fluff does not always protect against overheating or cooling, so pets need special attention.

Satin or satin rats are distinguished by fine, shiny hair. The radiance of the coat makes the animals attractive. Due to the thin coat, the hairs of the fur appear visually longer. Satin coats can be short, like standards. Long hair does not define this variety: not every long-haired rat is satin.

The fur coat of the Rex rat is similar to the fur of the cat breed of the same name – it is tough and curly. Elastic curls do not appear immediately. In rat pups, the curls have not yet formed, and the hairs can stick out in different directions. Because of this, the kids look disheveled. According to the breed standard, the coat should be uniform, without bald spots. The animals have short, curled whiskers. In other respects, Rex are similar to standards.

Such rats are born when mom and dad are carriers of the “curly” gene. The wool of such animals is unusual. On the skin there are areas of fluff and hard outer hair. Another feature is molting. From childhood, rat pups lose their hair, and the skin becomes like a patchwork quilt. Plots of wool alternate with bald spots. Later, the hair grows on the bald areas and falls out on the “hairy”. Double Rex is not officially recognized as a species.

Velvet rats have curly or wavy coats. On some individuals, it looks like bird feathers. Unlike Rex, Velveteen has a soft coat. This is due to less guard hairs. The undercoat of such rodents is thick, without bald spots. Vibrissae are long, slightly wavy, often with twisted tips.

Breeds of decorative rats by color

It is customary to divide the colors of rats into several groups.

The name of the group speaks for itself. All hairs of the animal are of the same color and uniformly colored from root to tip. Uniform colors include rodents of the following colors: 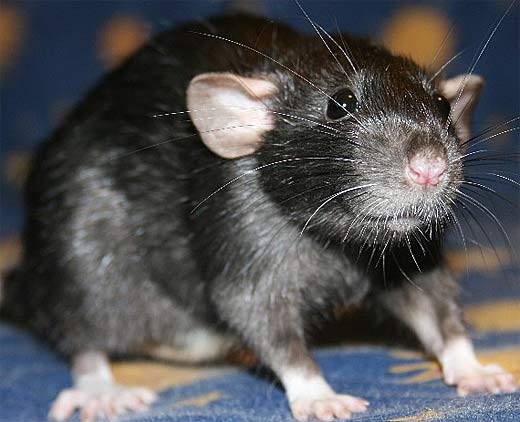 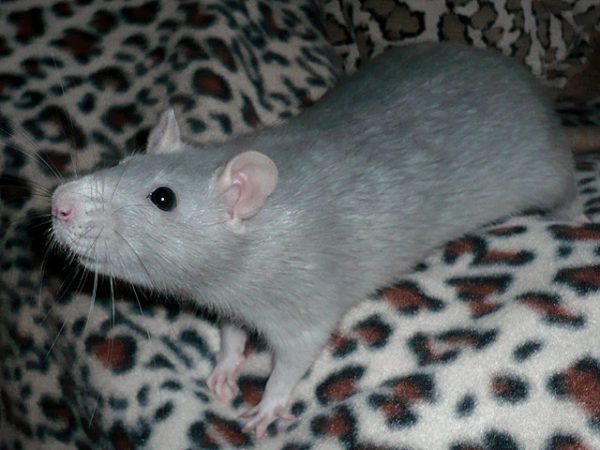 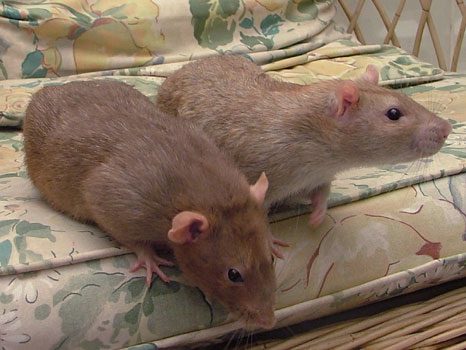 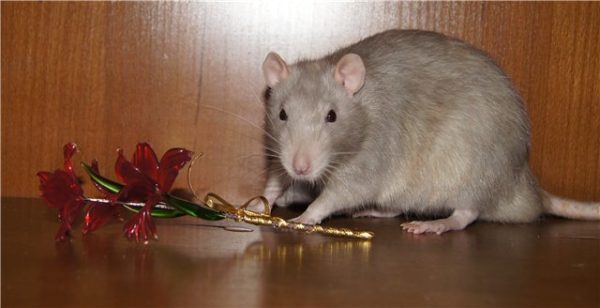 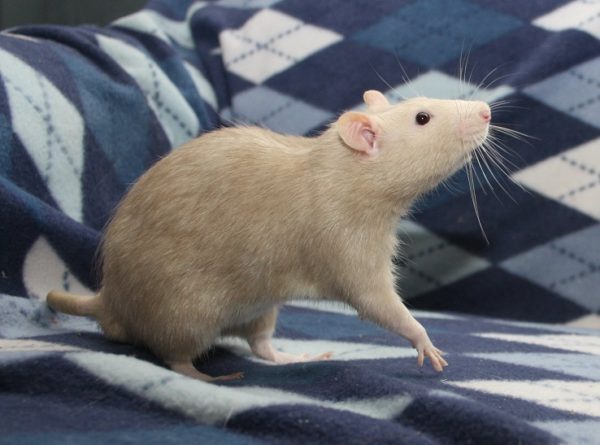 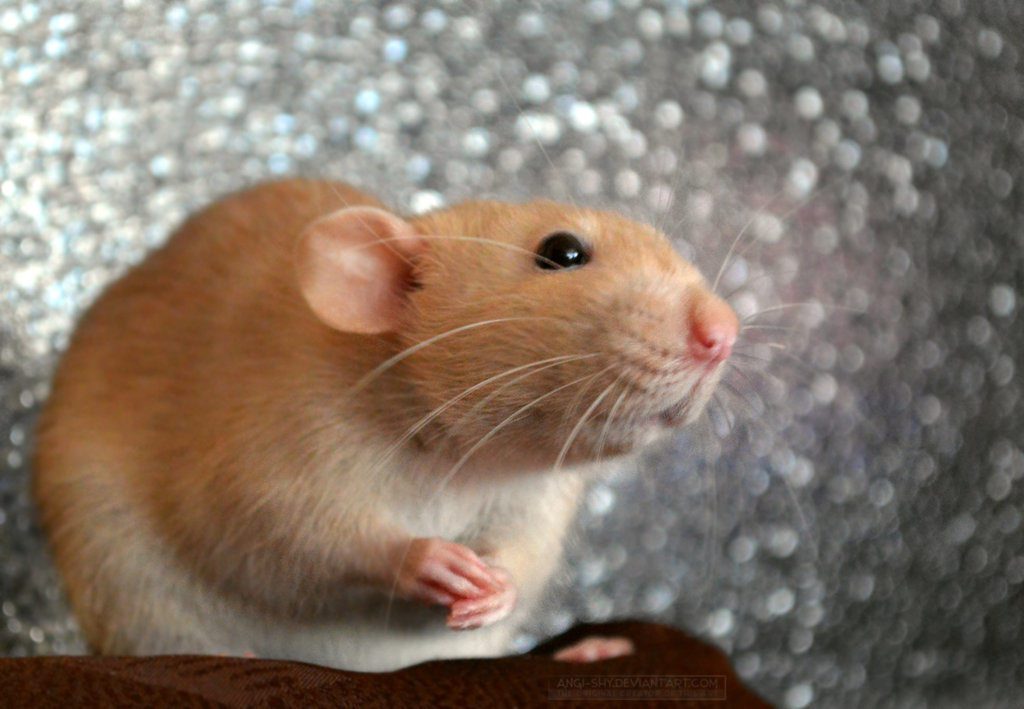 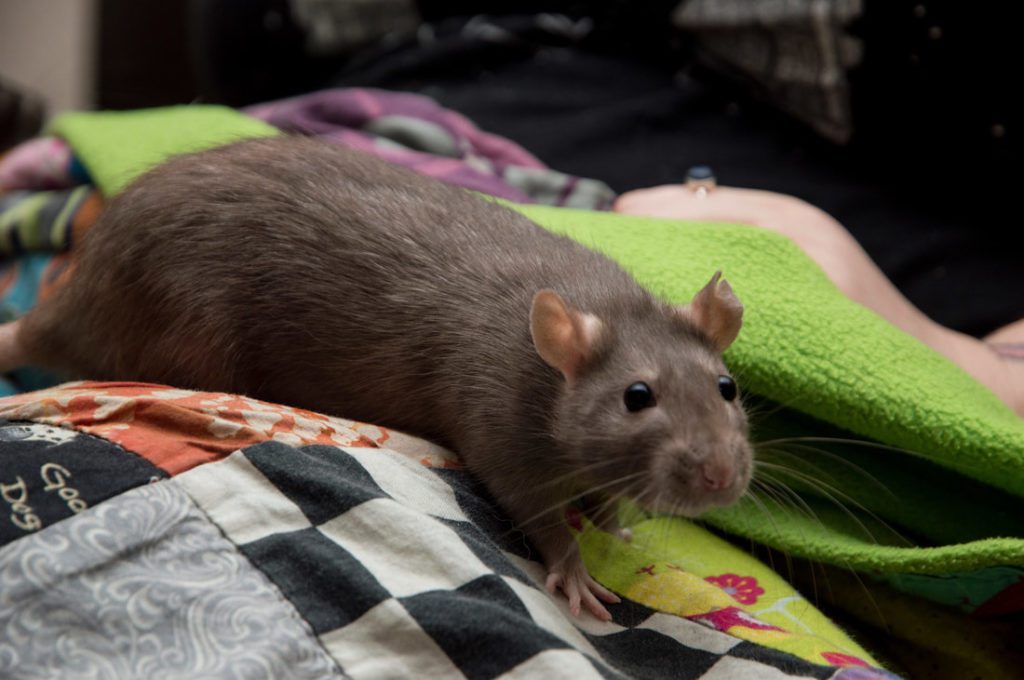 Such as caramel and chocolate are not even standardized. Rats also come in other colors.

In ticked colors, the hair is not uniform in color. It is, as it were, divided into sections painted in different colors. At the same time, the guard hairs are monochromatic. Wild rats belong to the ticked group – agouti color. At the base of the back, the hairs are dark gray, yellow and orange shades go above, the guard hairs are black.

Agoutis can be blue, platinum and amber. In blues, the coat changes from light gray to brown with light blue guard hairs. Platinum fades from light blue to cream. Amber has a transition from light orange to silver beige.

There are among the ticked type and red representatives of decorative rodents.

The color of the fawn is distinguished by a bright orange color. The base of the hair is gray or blue, but then there is a rich red hue. Inclusions of silvery guard hairs do not change the overall picture. The ticked group also includes different pearl colors of rodents.

Silver color is determined if the number of white – silver hairs is equal to the number of homogeneous ones. The fur coat of the animal should sparkle. If there are few white hairs, then this effect will not be. There may be a different color at the end of the white hair, this is allowed. The main thing is that the white wool is in sufficient quantity, and mixed with a uniform tone to create shine.

There is a group of rodents of separate types.

Albinos are laboratory-bred: it is almost impossible to get them at home. In addition to white wool, they are distinguished by red eyes, due to the lack of pigmentation. As laboratory animals, albinos are human-oriented. The owners believe that this breed of rats is the smartest and kindest. Rodents:

Albinos are resourceful, and a simple latch on the cage is not an obstacle for them. Animals are kind to their relatives, they know how to empathize with them.

This type of ornamental rat lives less than its relatives, on average, 1,5 years. Rodents are not too resistant to adverse environmental conditions.

Animals with different eyes are a mutation that is not transmitted to the next generation: the gene for different eyes is recessive. It is possible to achieve cubs with such a feature after systematic breeding work. As a rule, one eye of a rodent is pink and the other is black or ruby. The more contrast in eye color, the more valuable the animal. Odd-eyed individuals can be in a fur coat of any color and texture.

The Husky rat breed is named so for its similarity in color to a Spitz-shaped dog. A characteristic mask on the muzzle in the form of an inverted letter V is found in both rats and dogs. Rodents differ from their counterparts in that they change coat color throughout their lives. This complicates the choice of a thoroughbred animal: it is not known what color an adult rat will become. There are two types Badger and Banded. In one case – Banger – dark hair covers the entire back, leaving the belly light, in the other – Bended – the animal has only a dark hood. Babies are born solid, and fading begins at 4-6 months. The color of salt and pepper is valued in the breed.

Pure white spots are unacceptable. Another feature is the color of the eyes, they cannot be black. Variants from red to ruby ​​are possible.

It is generally accepted that tricolor rats do not exist, but rare cases refute this. As a rule, there is a leading color that is combined with white. In the history of rat science, at least twice in the hands of a breeder there was a rat of 3 colors.

One of the famous rats was born in 2002 in Alaska. It was a male named Solaris. He did not pass on his unique coloring to his children or grandchildren. Another case when a tricolor girl with a champagne-colored hood with black spots was accidentally purchased at the Bird Market. She was called Dusty Mouse or Syabu-Syabu.

Mastomis have nothing to do with rats, they even belong to the Mouse family and to a separate genus Mastomis. Scientists could not immediately decide on the family, so the rodents traveled from rats to mice. These inhabitants of Africa live next to man. They were recently introduced, so there is not much information on them. Outwardly, they look like both mice and rats. Rodents reach a size of 17 cm with a tail and weigh about 80 g. Thus, they are larger than a mouse, but smaller than a rat. They have few colors: ticked agouti with black eyes and argent (amber) clarified with pink eyes. Animals are nocturnal, live in a flock. Mastomis are jumping creatures, this must be taken into account when keeping at home. 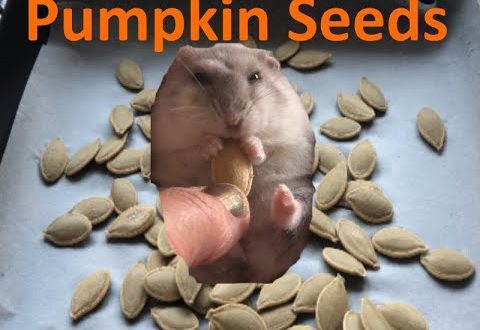 Is it possible for a hamster to roast seeds 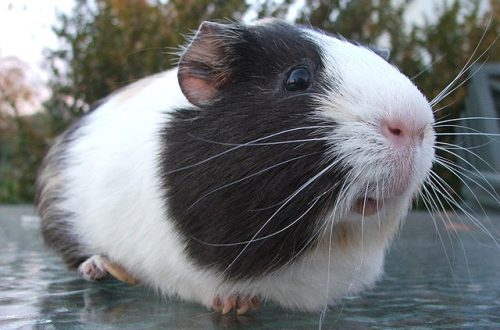 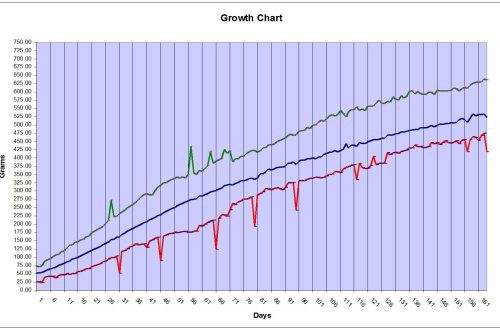 Chinchilla size: table of weight and height by months from babies to adults