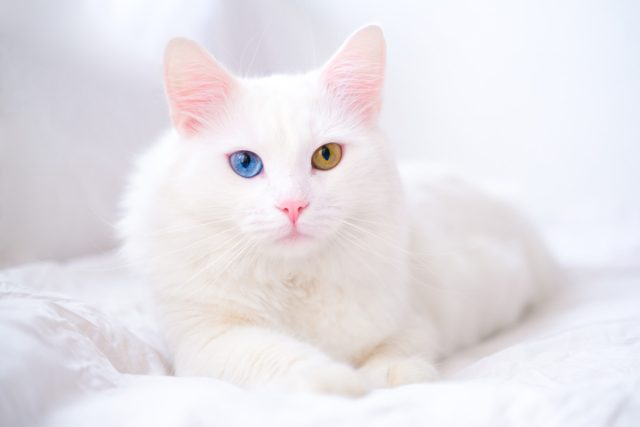 Traditionally in our country they love big fluffy cats. The characters of fairy tales and legends were distinguished by their luxurious fur coats. Favorite in our country, Siberian cats have found admirers all over the world. And luxurious Persian cats won the hearts of our compatriots in the 80s of the last century. Back then, a purebred Persian cat cost a fortune. I will talk about longhair and Semi-longhair Cat Breeds in this article.

According to the felinological classification, of all the breeds of fluffy cats, only one Persian is long-haired, and all the rest are semi-long-haired.

Cats of this breed are one of the most domesticated cats. They are friendly and accommodating, love affection, they have a quiet, melodic meow. The Persians are not prone to vagrancy, a little phlegmatic in nature, it is difficult for them to catch mice, and even more so rats. The Persian cat has a soft, straight and long coat. There is a magnificent collar (jabot) on the neck and chest, a very beautiful fluffy tail.

The coat of Persian cats requires daily care and is prone to tangles. Ingested wool often causes hairballs to form in the gastrointestinal tract. Due to the massive build and fairly short paws, it is very difficult for a Persian cat to run away from dogs if it suddenly finds itself on the street. Animals of extreme type with a flattened muzzle may have problems with breathing and tearing. They even feed the Persians from special flat bowls.

It is not recommended to let animals into breeding breeding earlier than 1 year old, in one litter – about two or three kittens. The mother cat may need help as she cannot gnaw through the kitten’s umbilical cord due to the flat face.

Persian cats are one of the oldest breeds exhibited at exhibitions. The ancestors of the Persian cat are sometimes considered a wild dune cat and even a manula, although this is not possible in the case of the latter. There is an assumption that the ancestors of the Persian cat were our Siberian cats, brought to Asia Minor. The Persians were first brought to Europe by the Italian traveler Pietro della Valle in 1526 from the province of Khorassan. The first to be introduced were white and silver colors. In the 19th century, the first Persian breed standard was written.

Sometimes color-point Persian cats are considered a separate breed. This breed is called Himalayan or Khmer. 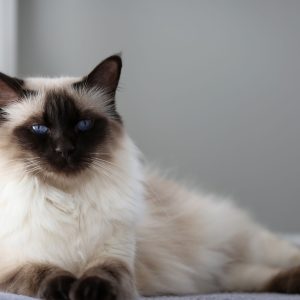 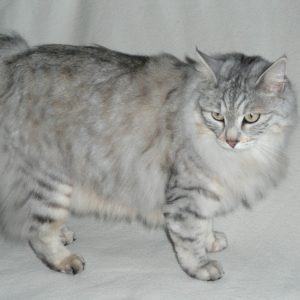 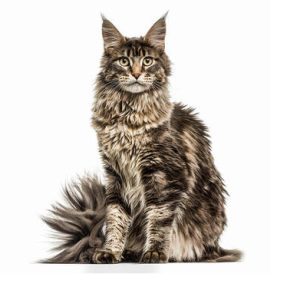 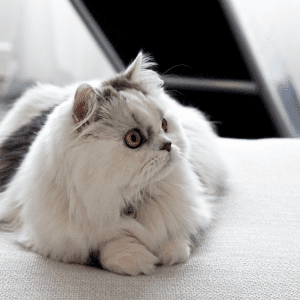 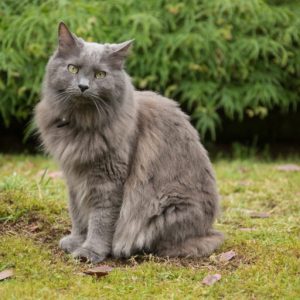 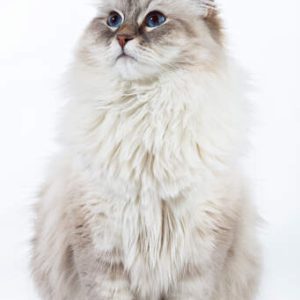 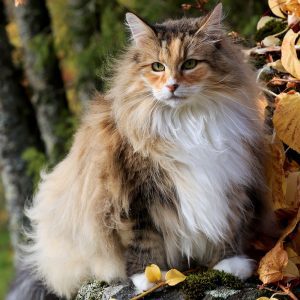 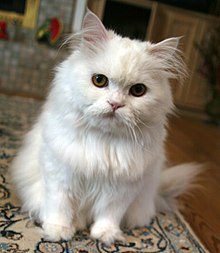 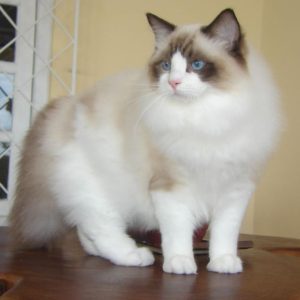 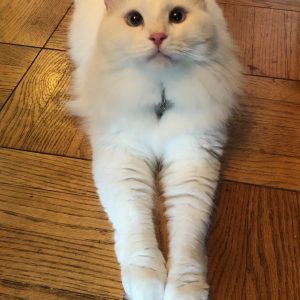 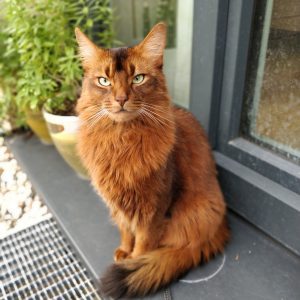 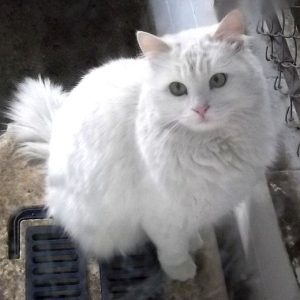 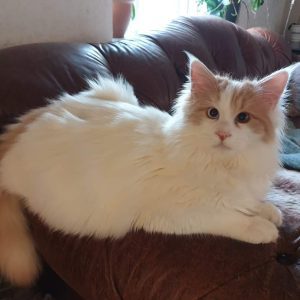 Amazingly beautiful fluffy white cat. The eyes may be blue or green, discord is allowed. Silky wool forms a luxurious collar on the neck, the tail looks like a sultan of a guardsman. A typical arch-villain cat from superhero or James Bond movies. Cats of this breed are very popular in Turkey, where several monuments have been erected to them. The character is soft, affectionate, calm. As a child, kittens are very playful.

Longhaired variety of Siamese cats. The coat is very fine and has no undercoat. Extremely affectionate and curious, with a melodious voice and graceful movements. Strangers are treated with caution. It was recognized as an independent breed in 1963. The most common color is seal point, but there are also cats with chocolate, blue, lilac and red markings.

A variety of uniformly colored oriental cats with long hair was called “javanese”.

Russian aboriginal breed from the distant Kuril Islands. At home, they are unsurpassed hunters and even fish. Cats of this breed are very large, in appearance they resemble miniature lynxes, and in behavior they resemble dogs. They love to swim, enjoy walking on a leash and easily learn to bring a toy.

Friendly with dogs, recommended for families with children.

There are also long-haired Karelian and Japanese Bobtails.

The Maine raccoon cat is said to have descended from the love between a raccoon and a domestic cat. Unfortunately this is not possible. A descendant of ship rat-catchers came to America with European settlers. Very large longhair cats with heavy bones. There are tassels on the ears. Any color is acceptable, white in color should not be more than one third of the entire color.

A cat of this breed weighing 14 kilograms is listed in the Guinness Book of Records. Its length from the tip of the nose to the tip of the tail is 1 meter and 20 centimeters. They love children very much, they meow softly.

Napoleon (another name for the minuet breed)

A young breed of cat, developed in North America by crossing Persian cats and Munchkin cats with short legs (like a dachshund). The result is miniature fluffy cats with a touching facial expression and short legs. Sheer cuteness.

A color-point variant of the Siberian cat. Bred in St. Petersburg and named after the Neva River. Very beautiful, affectionate and sedate animals of a fairly large size. Get along well with children, adapt to any conditions.

An amazingly beautiful longhair variety of the Russian Blue cat, bred and recognized in the United States of America in 1987. It has a mystical beauty, a very quiet voice, the breed is non-confrontational and unpretentious in food.

The national breed of Norway, recognized as the symbol of the country by King Olaf in 1977. According to legend, the chariot of the goddess Freya (Frigga) is driven by two Norwegian forest cats, donated by Thor the Thunderer. The breed is quite large (cats weigh up to 10 kilograms), with tassels on the ears, like a lynx. Similar to our Siberian breed. The character is playful, very fond of communication and affection, does not tolerate loneliness. Any color is acceptable, white markings are common.

The name is translated from English as “rag doll”. When these cats are picked up, they relax. These are large animals, very kind.

Well trained, very rarely show aggression. Not recommended for families with small children who may unknowingly offend them. Animals of this breed of Himalayan color (color-point) are fluffy, often with white marks on the paws and muzzle. From cats of this breed, the Ragamuffin breed originated.

Very beautiful and graceful breed of cats. Himalayan color (color point), white gloves and socks are required on the paws. Brown markings (seal point) are the most common, but lilac, blue, and chocolate markings are acceptable. Affectionate, sociable and affectionate in nature. Gets along well with dogs and other pets. There are many legends about the breed.

The native Russian breed are real predators that easily catch even hares and martens. The coat is waterproof with a developed undercoat. According to one version, it is believed that Persian cats originated from them. Siberian cats are quite large. At the international level, our Siberians received recognition in 1987. Allergies rarely occur on animals of this breed. Previously, cats of this breed were sometimes called Bukhara.

Long-haired variety of the Abyssinian breed. Wild and red colors are allowed, which are the most common. By nature they are very mobile and playful, they move a lot.

One of the few cat breeds that loves to swim. The birthplace of the breed is the vicinity of Lake Van in Turkey. There is even a museum dedicated to these cats. The color is white, on the head there is a colored cap and a tail painted with a feather of the same color. Markings are most often red or black, as well as tortoiseshell. The coat is long and waterproof; in summer, these cats shed heavily. They are dog-like in nature and are easy to train. Very smart and affectionate. They can be willful.

Of course, we should not forget about our outbred friends, among them there are stunningly beautiful animals. Perhaps one of you has the ancestor of a new breed at home. When choosing a cat of a long-haired breed, it must be remembered that the animal needs periodic combing. This is especially true of Persian cats, because their delicate coat easily forms tangles.

Ingested wool leads to the formation of hairballs in the gastrointestinal tract. To breed them, cats are given sprouted oats, garden grass, and a special malt paste. Commercial cat food for longhaired cats contains components to prevent the formation of hairballs. If you do not help the animal, then it can eat New Year’s tinsel, which often leads to the death of a cat.