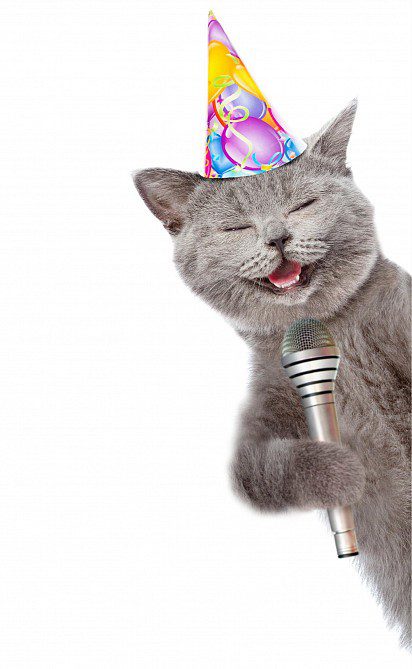 Animal behavior researchers claim that the meowing of domestic cats is a vocalization, partly developed by themselves, a kind of manipulation. In childhood, seeking the attention of their mother with the help of meowing, kittens begin to use such an instrument of influence in adulthood. To express various emotions, requests and demands, many pets develop their own repertoire. Variations of meowing help observant owners understand what the cat wants to tell them. It can be a simple greeting, or a reminder that it’s time to eat. Or perhaps the animal is experiencing discomfort or pain, fear or anxiety. Without a good reason, pets often meow, showing that they are bored. And sometimes it’s completely impossible to guess why the cat meowed for a long time and suddenly stopped when you, for example, switched the television channel or went to bed.

As a rule, cats become most talkative in the morning and late in the evening. And the persistent nocturnal meowing of adult animals is often associated with the call of nature. It is also worth considering the breed of your pet. The most silent are Persian and Himalayan cats, British Shorthair, Scottish Fold, Ragdoll. The most talkative are sphinxes, Kuril and Japanese bobtails, Egyptian Mau, Burmese, Balinese cats. The age of the pet also plays a role.

Why do kittens constantly meow?

Kittens, like children, are not able to cope with difficulties on their own. For example, it is difficult for them to adapt to a new place after parting with their mother. Babies may begin to meow at the sight of strangers, unusual furniture, or smelling unfamiliar smells. However, the kitten will quickly adapt to new realities if the owners respond to his crying with caress and attention. Plaintive meowing is easy to stop by taking the fluffy in your arms, stroking it, scratching behind the ear. However, as the animal grows older, it is not worth rushing to its every call – this is likely to develop a bad habit in the pet.

The continuous desperate “meow” may also be due to the fact that the kitten fell into a trap – tangled in a duvet cover, ended up in a place where it is difficult to get out. In this case, the meowing of the baby is a cry for help.

Kittens grow quickly, which is why they constantly want to eat. Persistently meowing, they remind the owner of this. It is better to immediately make sure that the pet’s dishes are in one place that is familiar to him and is filled with enough water and food.

Depending on the character, temperament, cats in varying degrees need to show the love of their owners, to communicate with them. Meowing for no specific reason, many pets are often just mischievous, hinting that they are not being given due attention. The owners often react vividly to such demanding calls, starting to amuse, appease the animal, caress it. Getting what she wants, the cat is convinced that persistent meowing is a wonderful way to get her way.

Over the years, bad habits become more and more entrenched. And at a venerable age, pets spoiled by excessive care can completely deprive the whole family of peace, constantly meowing. This is due to the fact that old cats, like people, lose their independence, experience a feeling of loneliness. Such animals require more and more attention, and they already know perfectly well how to attract it.

To prevent the cat from resorting to manipulative meowing, it is best to ignore it with patience. It is worth waiting until the pet gets tired of screaming in vain, and only then pay attention to it – caress, play. Education does not bear fruit immediately. Many impatient owners, without waiting for the result, acquire a spray bottle and spray the cat with water when its meowing becomes too demanding, annoying. However, regular “water procedures” can cause stress in a cat, which, in turn, often causes her sad wailing.

Unlike the manipulative one, a cheerful welcome meow always pleases the hosts. If a cat meets the household in this way, then, of course, it deserves an early reward in the form of a gift.

Causeless, at first glance, the meowing of a cat may be associated with his desire to communicate his fear, discontent, irritation. Such emotions in animals are often caused by changes in life. Cats can “roll up concerts” when a new family member appears, when moving to a new house, during repairs. In such circumstances, the pet will need more attention and affection.

It is well known that cats are extremely resentful of closed doors. They will not get tired of meowing until they get to be let in or out. In this case, the time interval between conflicting requirements may not exceed a minute. 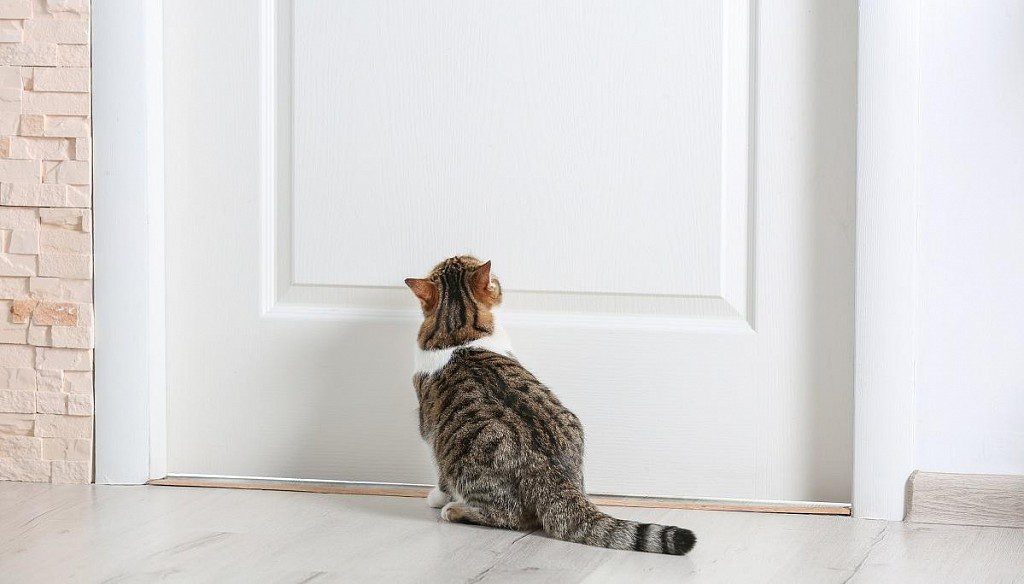 Why is this door closed? My indignation knows no bounds!

Many cats, especially young and energetic ones, often meow when they get bored. So you should make sure that the animal has enough variety of toys.

Not all cats are happy to be constantly stroked, squeezed, picked up or placed on their knees. This does not mean that they are not attached to the owners, but due to the breed or character. In protest, such wayward and independent pets give a voice, and sometimes their meow becomes very formidable.

Some cats are weather sensitive. A change in the weather or an approaching natural disaster causes them anxiety, and sometimes panic. Animals begin to fussily run around the house, loudly and protractedly meow, howl.

The cat wants to go outside

When the sun warms, it becomes warm, tempting smells from the street penetrate into the apartment, domestic cats show an increased interest in what happens outside the four walls of their homes. Pets can sit for hours on the windowsill, basking and looking at flying birds, walking people and animals. Persistently meowing, they trample at the entrance or balcony doors, hoping to slip through the gap that has formed at a convenient moment. To stop a cat concert, you can walk the cat on a leash or let him look out the front door and look around, sniff a small area. Most often, a pet, having satisfied its interest, quickly returns to its safe little world and stops meowing for a while.

Another thing is the call of nature. Everyone is well aware of the behavior of unsterilized pets during the search for a partner. So under such circumstances, the question of why a cat meows for no reason becomes irrelevant for pet owners. The reason is obvious – the thirst for love and the desire to have offspring. Not being able to satisfy their natural needs, the pets constantly meow, sometimes plaintively, sometimes breaking into an op, trying to escape, endlessly putting marks. Sooner or later, the owners have to make a decision – to sterilize the animal or let it “go into all serious trouble”, taking responsibility for the fate of the future offspring and the health of the cat itself. 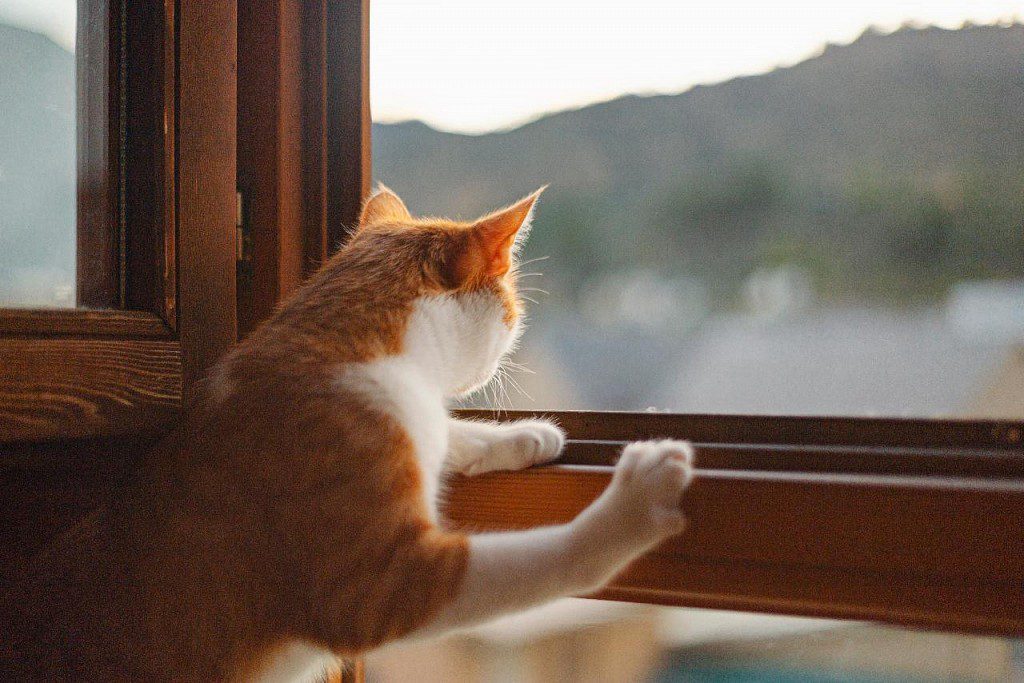 The cat wants to go outside

A cat’s insistent meowing often means it’s hungry, and this is a common occurrence. But if the cat continues to meow or even scream after eating, most likely she is in pain due to problems in the gastrointestinal tract. A similar story – with a trip to the toilet. Cats often meow before this event if they find the litter box is dirty. The owner can easily eliminate such a cause. You should be wary if the animal continues to meow in the process of defecation or after it – this may indicate urolithiasis, from which cats suffer quite often. In both cases, you should contact your veterinarian. 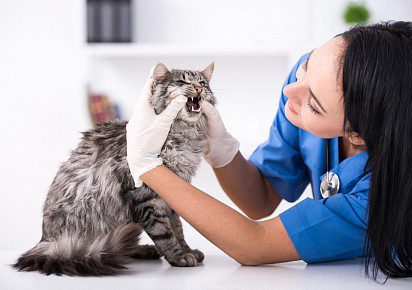 Finding a problem at the veterinarian

Sometimes the owners do not immediately notice that the cat was injured, for example, injured his paw. Then the pet, plaintively meowing, begins to attract attention.

Perseverance in the behavior of the animal is a reason to carefully examine it, feel it. If the injury causes concern, it is best to take the cat to the doctor immediately.

Nocturnal meows of pets are very often caused by helminths. It is at this time that the parasites are activated, causing severe pain in the cat. A veterinarian will help prescribe the right treatment, choose the drugs.

At night, cats who have crossed the 10-year age threshold often meow. During this period, they are more likely to develop Alzheimer’s disease, among the symptoms of which are sleep disturbance and increased vocalization. It is impossible to cure this disease, but the veterinarian will advise medicines that can alleviate the condition of the pet.

Resentment against the owner 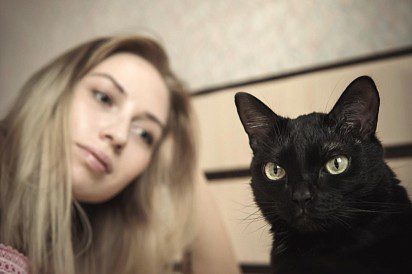 Sometimes the owner, sincerely wondering why the cat is meowing for no reason or even hissing, actually just forgot that he recently slapped her with a slipper, a broom, or stepped on her tail hard. The offended animal, for sure, held a grudge and was frightened. With the help of a loud meow or hiss, the cat tries to defend itself, scare the offender, and drive him out of his territory.

The disapproval of a pet can also be caused by the arrival of guests with their own cat, especially if she notices the kind attention of the owners to the fluffy visitor.

To make amends, you need to choose a moment when the cat will look calm. Try putting a fragrant treat in your palm and reach out to it. If the cat comes up and starts eating, lightly scratch it behind the ear, and if it doesn’t want to, leave the treat next to it. She will most likely forgive you. 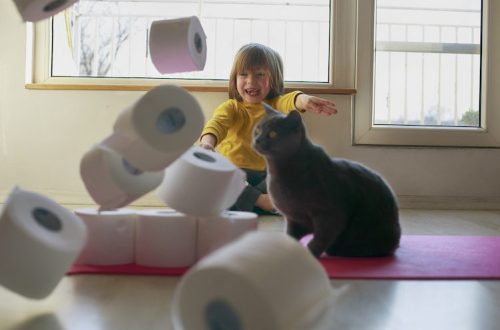 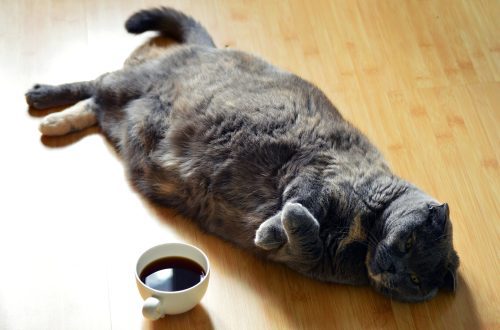 Excess weight in a cat: what diseases it leads to and how to deal with it 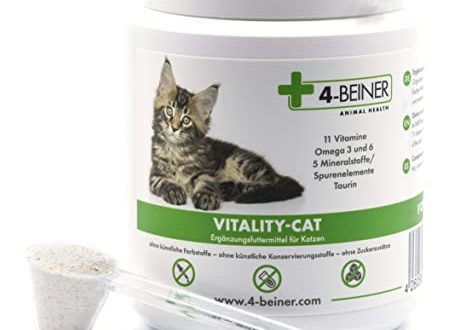 Vitamins and dietary supplements for cats