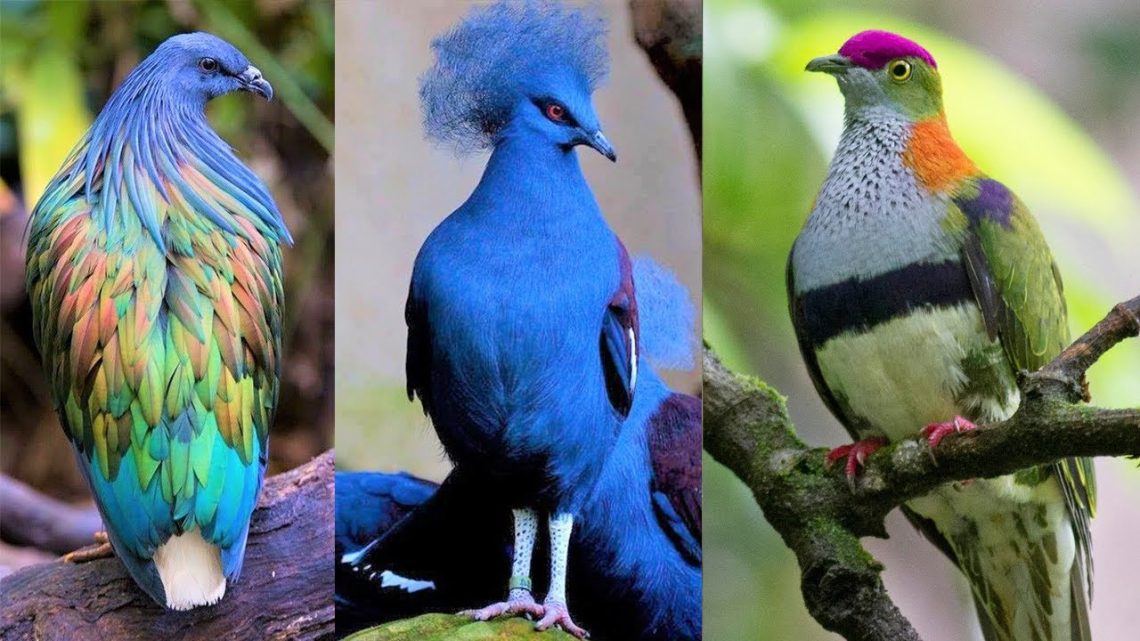 There are a lot of varieties of pigeons, but all of them are united by such a feature as importance! It is unlikely that you did not pay attention to what an important bird the dove is? How he walks on the ground somewhere in the park between the benches where people rest, in search of treats and at the same time a female with whom to flirt.

Pigeons are charming, beautiful and funny. And so different! Each species has distinctive characteristics: the English, for example, by opening its wings, “creates” a cross from below (therefore, the second name is cross), and the German gull is that still plump whim – give it special food, you see.

There are a lot of pigeons in nature, but let’s admire the most beautiful of them. The rating, of course, cannot be completely subjective, but we decided to include these species, because they always get into the top lists. 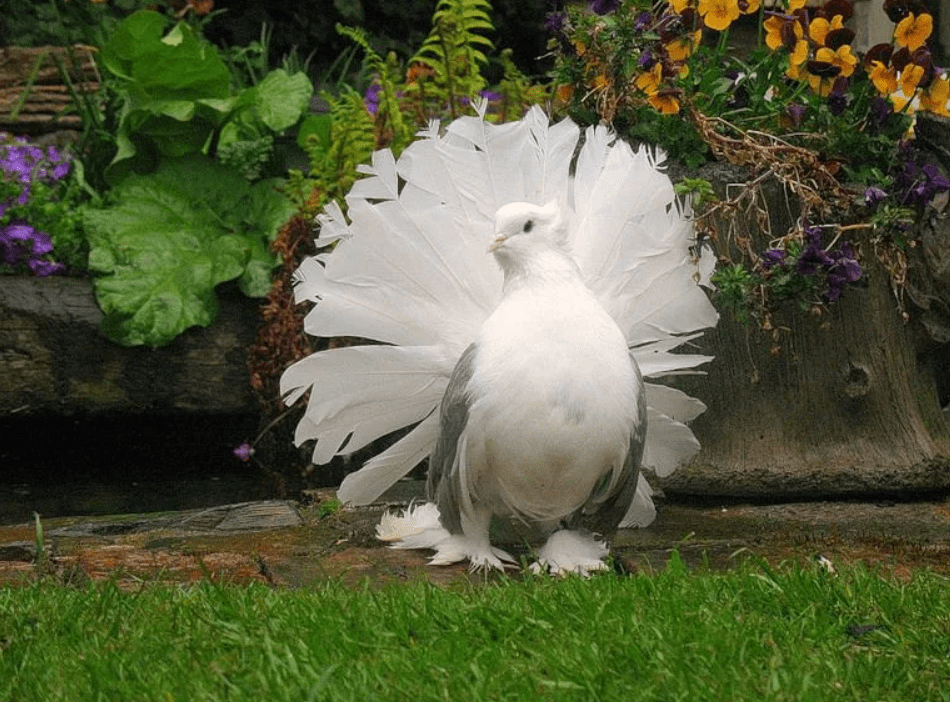 These pigeons are bred for decorative purposes – they look so beautiful that you constantly want to take pictures. Peacock pigeon got its name because of the resemblance to the bird of the same name – its tail resembles the tail of a peacock.

This species is unpretentious, hardy, eats buckwheat, oats, millet and other cereals, loves a long loaf – if you want to please a peacock dove, then share pastries with it. This type of pigeons is often a guest of various exhibitions.

They feel quite comfortable in the enclosures – some, not afraid, release them, knowing that they will return home. They are trainable and can perform various commands. His main motivation is food. 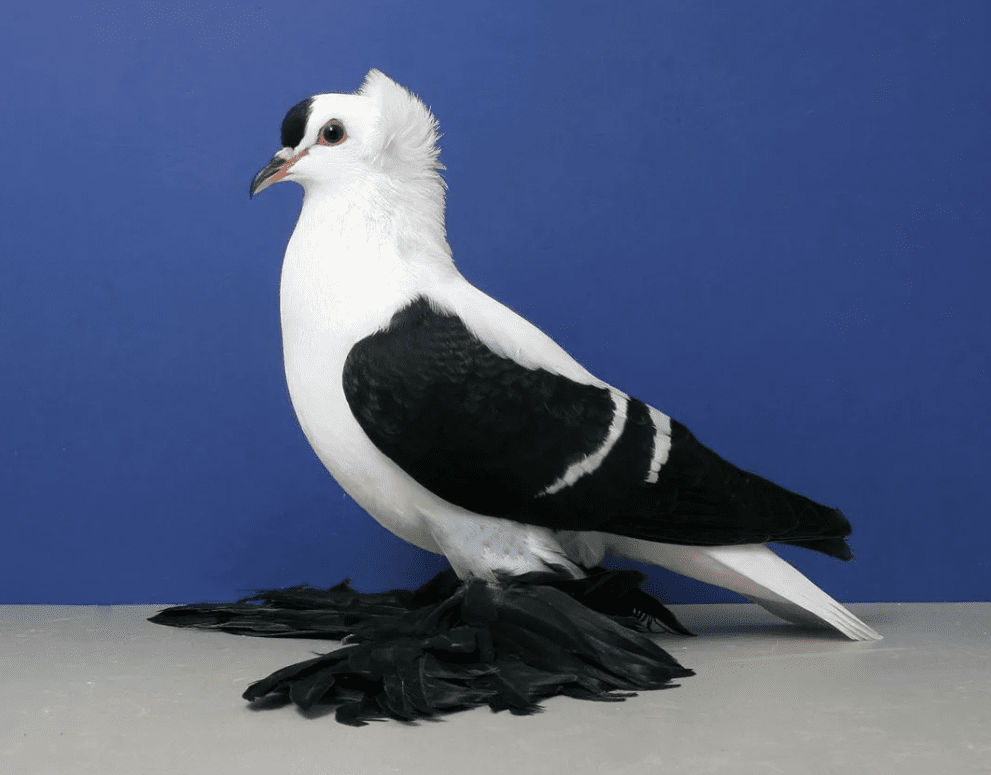 The breed of these amazing pigeons was bred in Bohemia (Czech Republic). Representatives of this species are quite large, have elegant plumage, the colors of their paws and wings are chess. Because of the beautiful appearance bohemian swallow often becomes a participant in exhibitions.

The Bohemian Swallow is a peaceful dove that lives about 15–25 years. In terms of content, it does not require special conditions, but if you want to look at the beauty of its flight, it will not work, the pigeon likes to sit passively most of the time.

No wonder the breed was called magical, because it looks so elegant! The pigeon has a large physique, lush feathers on the back of the head. On the head there is a mark in the form of a cockade. The breed is bred for beautiful plumage. 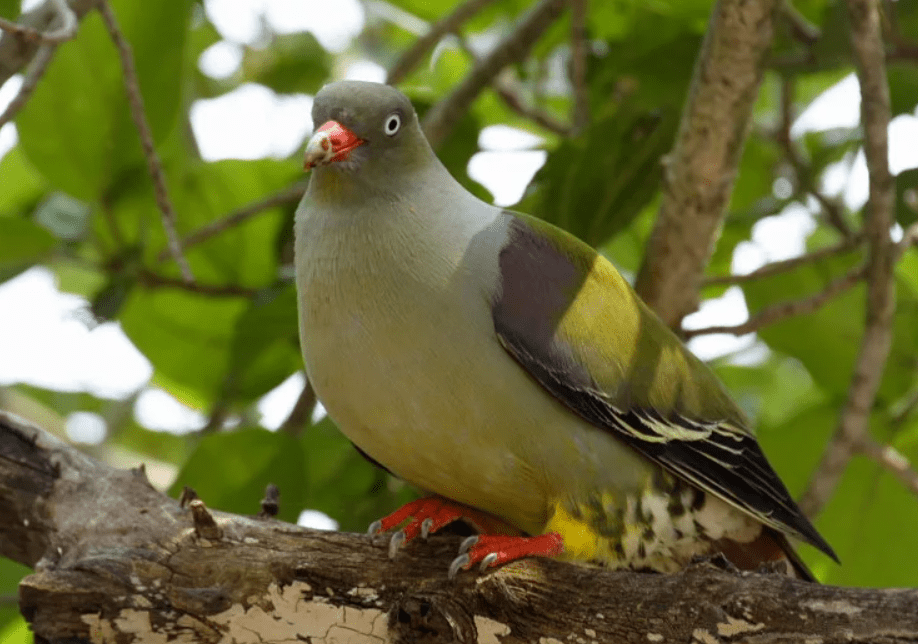 There are many interesting things on our Earth, and pigeons attract no less attention than other birds. African green dove has an interesting color, so it is often confused with parrots.

This species got its name due to the color: the wings and lower body of the African dove are yellowish-green. The green dove has a soft plumage, it has a short neck and a small head, and the breast is quite powerful.

Representatives of this species do not like to descend to the ground, they prefer to sit on trees and enjoy fruits and berries (elder, bird cherry). This bird is listed in the Red Book, so hunting for it is prohibited. 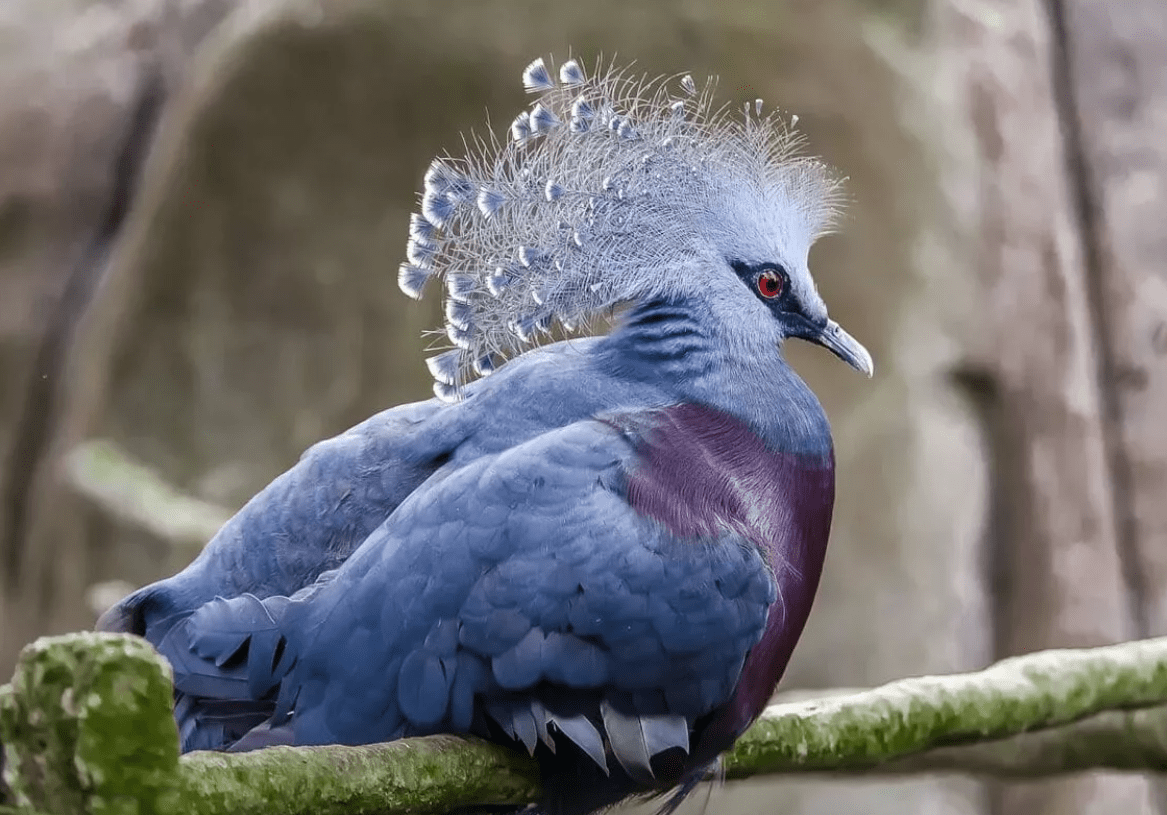 The tropics, as we know, abound in fruits, berries, all kinds of flowers and, of course, interesting birds. Lives in them and amazing crowned fan-bearing dove, namely, in the forests of New Guinea, it is also distributed on nearby islands.

This pigeon prefers to live in a flock, wants to create a couple for life, remaining faithful to only one partner (partner). The fan-bearing crowned dove loves to walk on the ground, regales on the fruits that have fallen from the trees.

This pigeon is very beautiful! Bright coloration is what makes this type of pigeon stand out even against the backdrop of bright nature in the jungle. Particular attention is drawn to the head: the dove has magnificent, fan-like, fluffy wings. 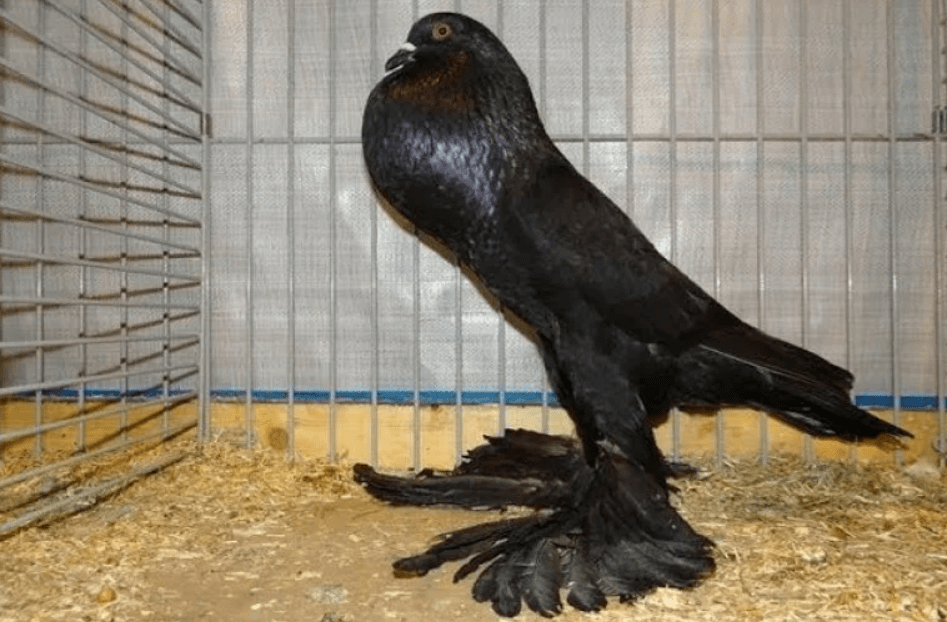 Representatives of this species include pigeons, which differ in size, plumage and color, but all have the same feature in appearance – a developed goiter inflated with air. Such a sight can even scare!

Brenen puffin because it is called that, that it is able to inflate and hold the goiter. Assessing the merits of the puffin, the first thing they call is color and harmony. This type of pigeon has long been loved by breeders, because they have an unusual, beautiful appearance.

It is believed that the breed appeared in Western Europe. The peak of popularity came in the 20th century – then in the Netherlands and Belgium, puffers began to be bred most actively. Currently, there are about XNUMX varieties. 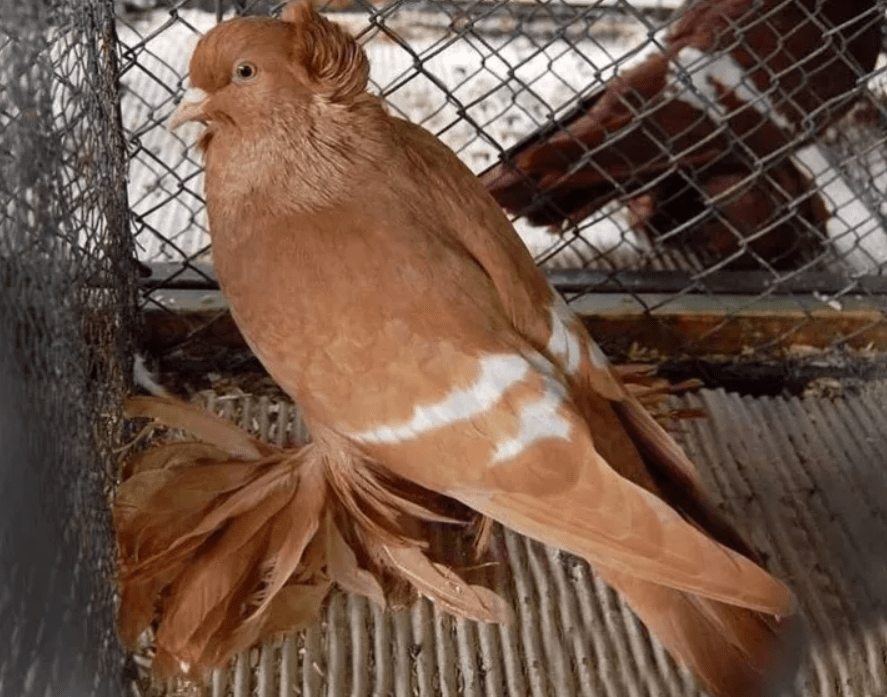 Just look at the paws of this feathered one – how can you resist its beauty? Saxon field pigeon – a rather strange variety, bred by selection. Descendant of the blue dove.

Not much is known about this breed of pigeon, if you look at the appearance, it is very elegant, has stripes on the plumage. The feathers on the paws attract a lot of attention, I want to take photos with this dove! 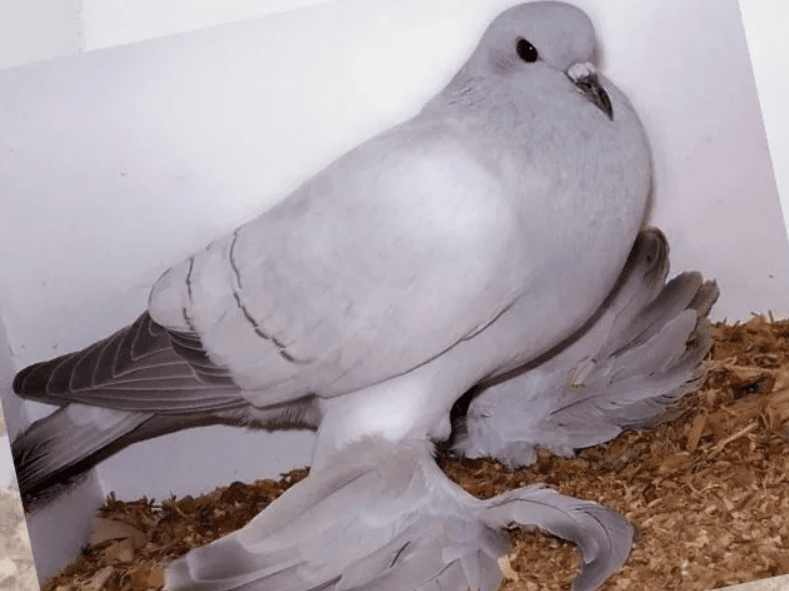 No, the pigeon got this name not because it is cold, but because it has an “ice” color. ice dove was first bred in Germany, the breed was obtained by breeding over the years of selective breeding.

The ice dove is a domestic species. It has several varieties that differ in color and type. The main color of the dove is pale gray, which gives its appearance an “icy” effect. This bird is not only very beautiful, but also has a pleasant disposition: calm, gentle.

Usually this breed is raised as a pet in order to participate in exhibitions with a pigeon. Due to feather dust affecting the coloration of the pigeon, this species is not suitable for people with allergies. 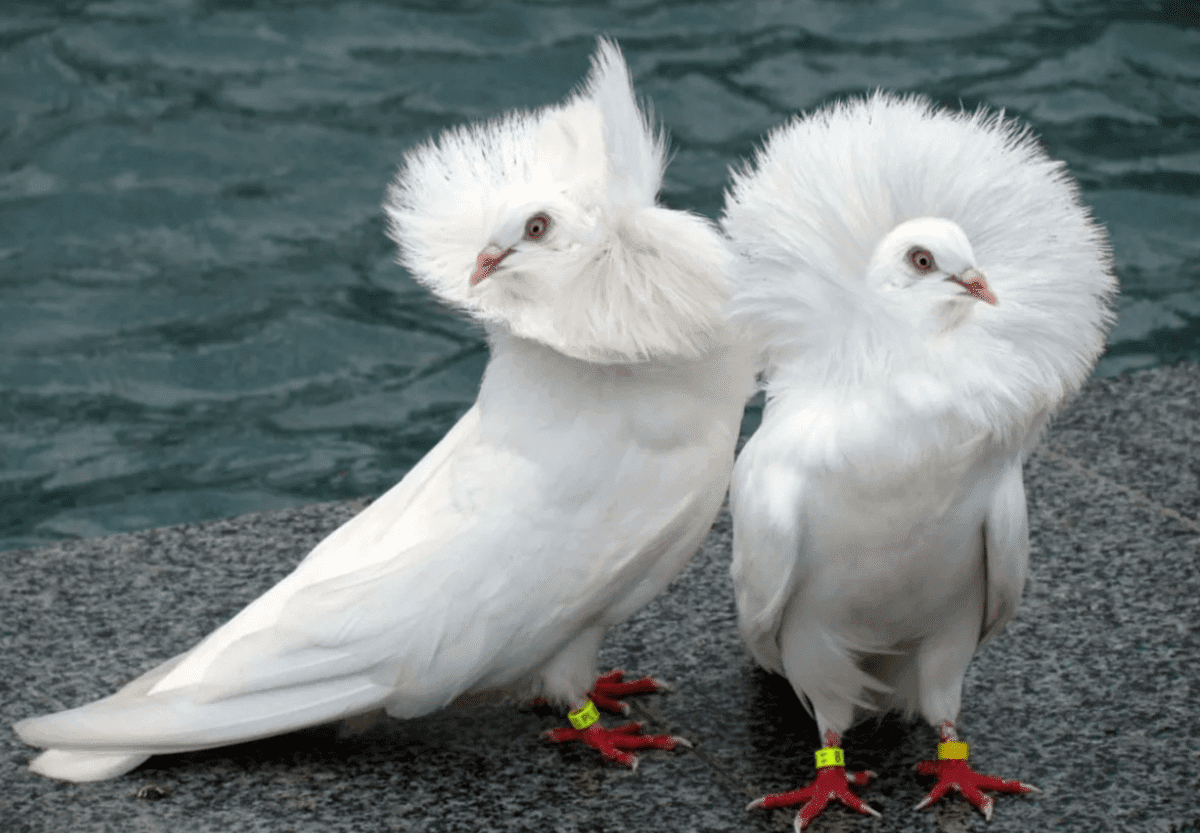 Appearance at Jacobin very extravagant, it seems that he should be the pet of some lady who loves to attract attention. The first mention of the Jacobin dove dates back to the 1522th century. The species was first described by Ulisse Aldrovandi (1605–XNUMX).

The hood of this interesting bird deserves special attention: it looks soft, but in fact it consists of dense feathers of medium hardness. Actually, the hood makes the breed so attractive.

The color of the Jacobins can be different: speckled, plain, with a pattern of a monk. Usually these pigeons are settled in a spacious and clean place, separate from other breeds. Due to the characteristics of the breed (this is important to consider!) Jacobins cannot bend over to eat, so they need to make special feeders. 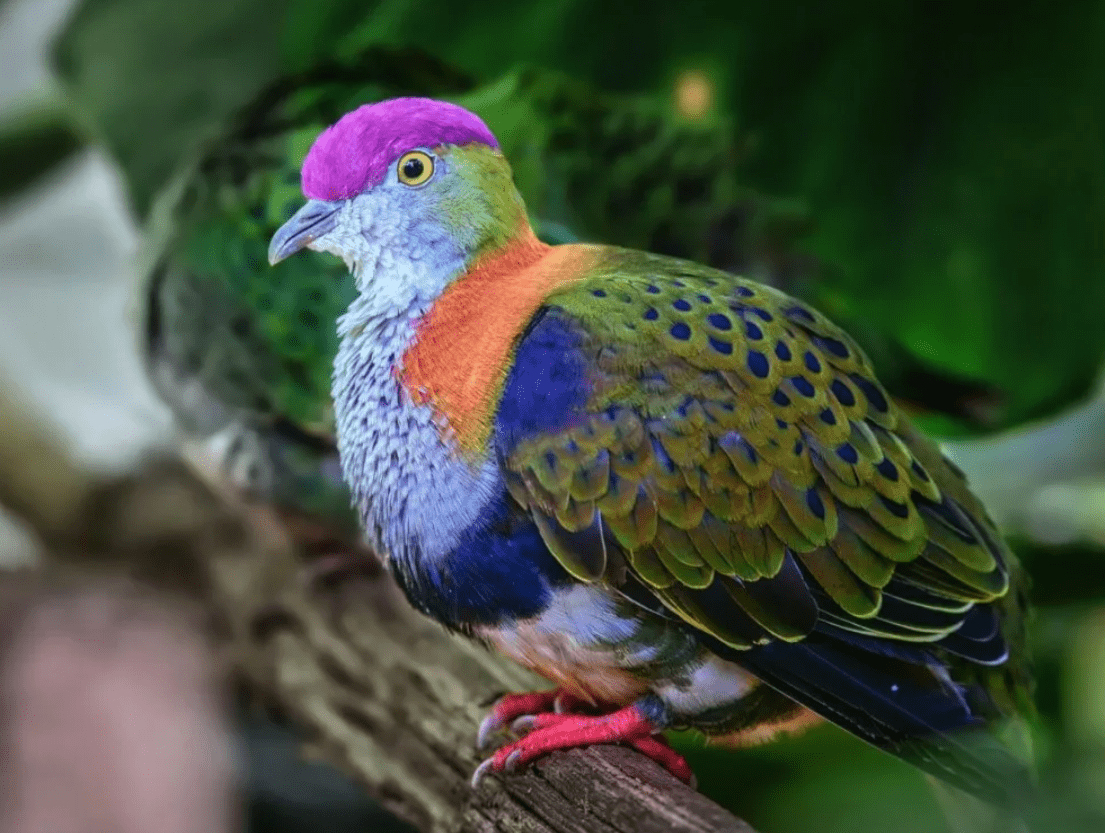 Mariana pigeons distinguished by green wings and a bright pink spot on the head. They also have a beautiful blue chest and purple-orange feathers on their stomachs. They like to live in the upper floors of the rainforest.

The second name for pigeons with bright plumage is “fruit dove”. They love to eat fruits, but their favorite delicacy is ficus. This species breeds all year round. The couple builds a nest at a height of at least 3 meters, trying to hide it from the eyes of predators.

This bird is on the verge of extinction, because the brown boiga (a tree snake that chooses birds and eggs as food) has spread to the islands. The Mariana pigeons were not ready for such difficulties, so the birds that lived on Guam, alas, died out. 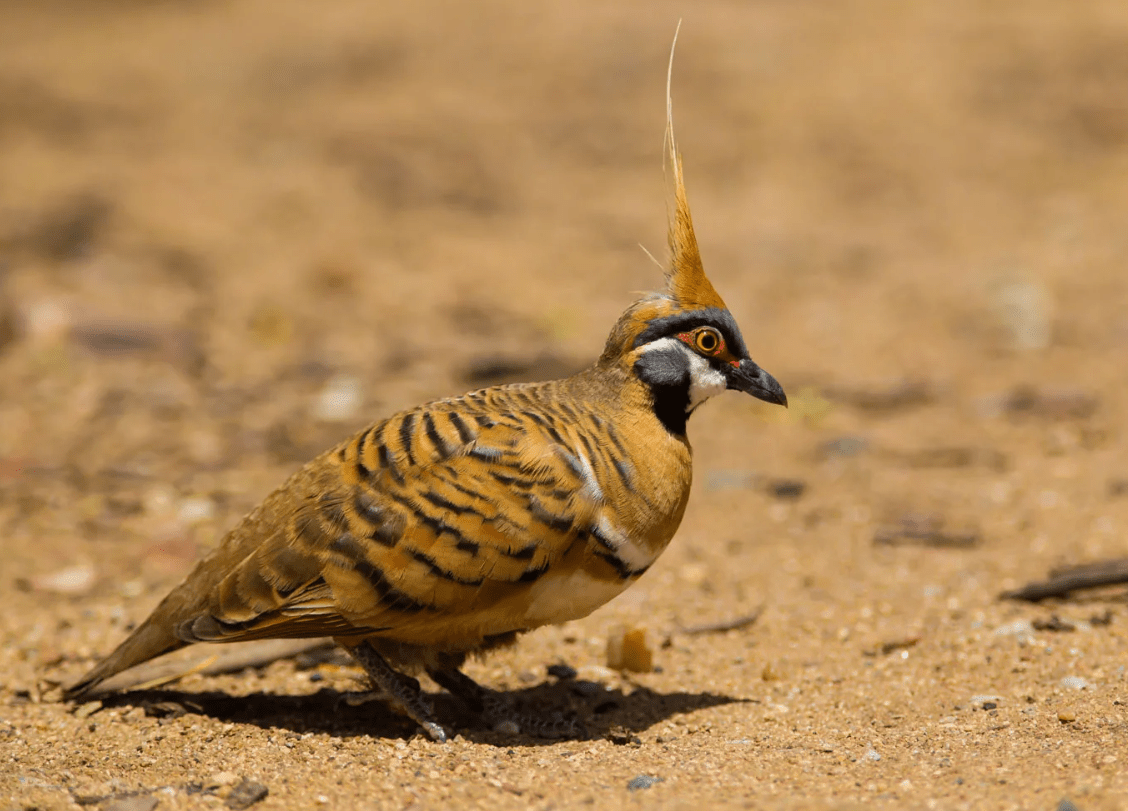 A bird with a bright look and a crest is called sharp-crested rock dove – Try not to pay attention to this! Photographers who want to capture such beauty will have to climb deep into the arid regions of Australia.

In sultry conditions, the sharp-crested pigeon feels more than good, their rusty tufts slip between the stones, practically merging with them in color. This breed is so hardy that its representatives go out to look for seeds in the heat.

The body length of such a bird ranges from 28 to 31 cm. The plumage is mostly olive brown. These pigeons look very interesting – once again you are amazed at how amazing our nature is! The most interesting thing is that sharp-crested pigeons communicate through sounds that are reproduced in flight due to feathers. 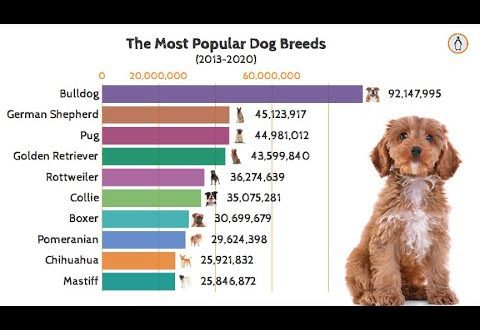 Top 10. The most popular dog breeds in the world 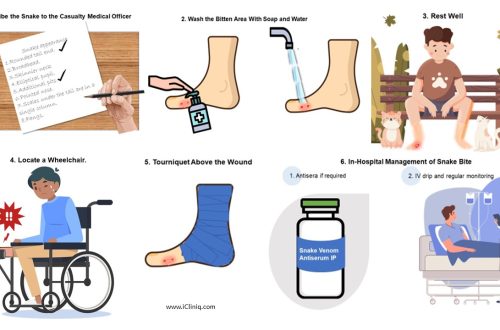 What to do if you are bitten by a viper: consequences of a bite, necessary first aid and proper treatment