Signs of illness in kittens

Since there are many diseases that kittens suffer from, the symptoms can be very diverse. Be sure to contact the clinic if the baby has: 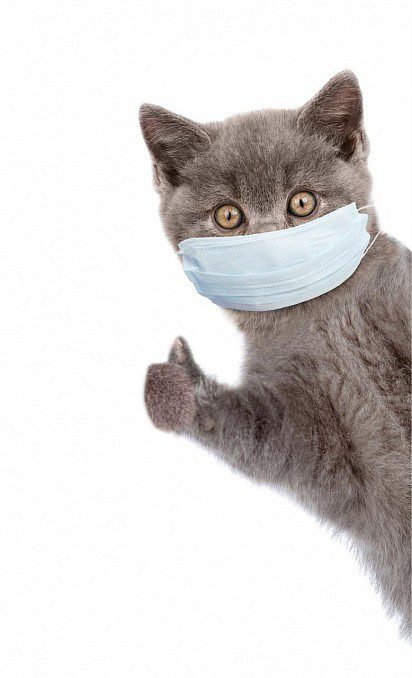 In addition to the listed somatic disorders, changes in the behavior of the baby are possible. It can be meowing, the desire to hide in a dark secluded corner, apathy and drowsiness, sudden aggressiveness. Since some cat diseases are contagious to others (animals and people), sometimes a pet needs to be isolated until a diagnosis is confirmed.

This group of diseases includes anomalies and malformations in the prenatal period, injuries received during the passage of the birth canal. In addition, newborn pets can get sick due to the unfavorable transfer of pregnancy and childbirth by the cat, as well as problems with the production of milk in the mother. 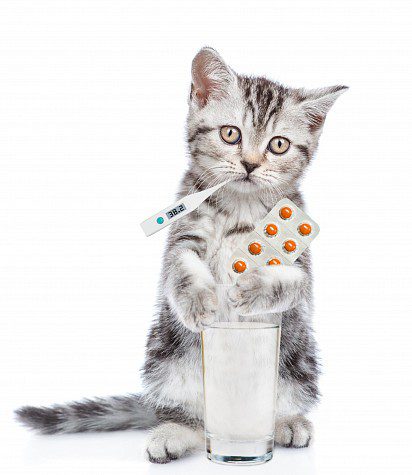 The cause of this condition is a partial detachment of the placenta from the uterus or infectious diseases of the mother, as a result of which the fetus does not receive enough oxygen and nutrition. The baby is born with low body weight, with motor disorders, weak sucking, drinking little. As a result, his body is supercooled, dehydrated, the kitten dies in the first hours after birth or within a few days.

Pathology is not treatable. The animal is doomed to death in advance. Pathology can be prevented by providing a pregnant cat with good nutrition, timely treatment of infections in her, and vaccination. Since the genetic incompatibility of animals during mating can also become the cause of the syndrome, it is necessary to take a responsible approach to the choice of the future father.

Hypogalactia is a functional pathology of the mammary glands of a cat, in which the amount of milk produced is not enough for the normal development of the cubs. This leads to a lack of nutrients, exhaustion, weakening of the immune system, which is not yet fully formed.

Among the causes of hypogalactia can be noted: the first birth of a cat and a poor diet. It is necessary to provide the mother with good nutrition with a high content of carbohydrates and proteins. The way out can also be supplementary feeding of newborns with artificial mixtures.

With diseases of the mammary glands or uterus in a cat during lactation, milk can become toxic to newborns. From the side of kittens, this phenomenon manifests itself in the form of:

The last point may be a sign of blood poisoning in a kitten.

With toxic milk syndrome, kittens are treated symptomatically and transferred to artificial feeding.

Skin and parasitic diseases in kittens

Skin diseases and parasitosis (external and internal) can be called the most common diseases of kittens. Treatment and prevention should be started almost from birth, since the pathologies of this group significantly weaken the immune system, lead not only to somatic, but also to mental consequences: the rapid penetration of bacteria, viruses, fungi into the body, itching, the formation of ulcers, nervousness, loss of appetite and sleep, weight loss.

Helminthiases are a group of parasitic diseases caused by helminths (worms, worms). Sources of parasites: surrounding objects, water, food, soil, mother’s milk, and so on. Due to their considerable diversity, consider the most common.

Since there are many types of worms in kittens, the pet must be shown to the veterinarian. After the diagnosis, the specialist will prescribe the right drug, taking into account age characteristics and other factors. It is impossible to treat a baby with anthelmintic drugs on its own, since during the mass death of parasites a huge amount of toxins is released. The animal can quickly die from intoxication.

Fleas lead to anemia, are a source of helminths, mycoplasmas. Symptoms of a flea infestation: itching, scratching, the appearance of nervousness, aggression. Treatment consists in treating the kitten’s fur with special preparations, bathing in medicinal solutions and herbal decoctions, and using anti-flea hygiene products. For prevention, drops are used at the withers, a flea collar, medicated shampoos.

The tick causes severe itching of the skin, as it bites through the epidermis, feeds on blood and lymph. Clinical picture:

The disease is difficult to treat, often accompanied by relapses. In advanced cases, the kitten may die from sepsis. It is impossible to completely protect a pet from the disease, since pathogens can enter the house on a person’s shoes or clothes. Prevention of pathology is to increase the immunity of kittens and timely visit a doctor.

The microscopic parasite causes damage to the inner and outer ear. Symptoms: itching in the ears (the animal shakes its head), putrid odor, the presence of dark grains in the ear canal and shell, damage and redness of the skin underneath. The pet constantly scratches its ears, rubs against various surfaces, becomes irritable, eats and sleeps poorly. Treatment consists in washing the skin of the ears from secretions, applying drops or ointment prescribed by a doctor. Prevention consists in regular examination of the kitten’s ears, exclusion of contact with stray animals, maintaining the hygiene of the hearing organs.

Infectious diseases are also common pathologies in kittens. The baby’s body is constantly exposed to viruses, bacteria, pathogenic fungi, and weak immunity due to age cannot provide sufficient protection, especially with artificial feeding. Such diseases can be contagious not only for nearby living animals, but also for humans.

Often occurs in kittens whose mother has had an infection or is ill at the time of lactation. In such cases, damage to the eyes is observed even before they open. But there are other causes of conjunctivitis:

Symptoms of conjunctivitis in kittens include:

For the treatment of uncomplicated forms of conjunctivitis in kittens, washing with a solution of furacilin, herbal infusions is used. If the disease does not go away, but only worsens, you need to take the pet to the clinic and conduct an examination. Based on the results of the diagnosis, the veterinarian will prescribe antiviral, antibacterial, antihistamine, antiparasitic and other drugs. If there are several kittens, and the rest (or some of them) are healthy, then in parallel they need to carry out preventive treatment. You can also temporarily isolate a sick pet.

The causative agent of feline distemper, parvovirus, infects kittens between the ages of two months and six months. It is highly contagious to felines and is not transmitted to humans. The disease affects the gastrointestinal tract (especially the thin section), the lymphatic system, and the bone marrow. It is also believed that the pathogen is able to penetrate the respiratory organs of the animal.

The source of infection is a cat that is sick or has already had distemper. Parvovirus lives in the external environment in the feces and vomit of a sick animal, and its viability reaches a year. In addition, the pathogen can be transmitted in utero and through the bites of fleas, ticks, and lice.

The clinical picture of feline distemper is characterized by:

The kitten is in danger of dehydration and death in a short time, so you need to contact a specialist at the slightest manifestation of symptoms. The mortality rate in cats with panleukopenia reaches 90%. In this case, the rapid course of the disease is possible, and it will no longer be possible to save the pet.

There is no specific treatment for feline distemper. The doctor prescribes drugs according to the symptoms. In addition to powders, tablets, injections into the muscle, droppers and other measures may be prescribed, depending on the condition of the kitten, the age of the animal, the degree of development of the disease, and so on. With timely treatment and adequate treatment, the baby recovers in about 4-5 days, remaining a carrier of the infection.

It is possible to prevent infection with feline distemper by vaccination: first, the vaccine is given twice (at the age of 1,5-2 months and a month later), and during life – once a year.

This disease is caused by the feline calicivirus. It is common mainly in debilitated kittens aged 2-24 months. It lasts about three weeks, in 30% (according to other sources – 80%) of cases ends in the death of the animal. Calcivirus is transmitted by contact, through food, clothing, through the air. It is not dangerous for a person.

Symptoms of calcivirosis in kittens:

Kittens are characterized by the development of viral pneumonia, bronchitis, inflammation of the oropharynx, trachea. If help is not provided in time, the kitten will die within a few days.

Symptomatic treatment: the doctor may prescribe antibacterial, antiseptic drugs, anti-inflammatory and other drugs. To prevent calcivirosis, you need to follow the vaccination schedule: the first vaccination against feline calcivirus is carried out at 2-3 months (twice), and then annually. 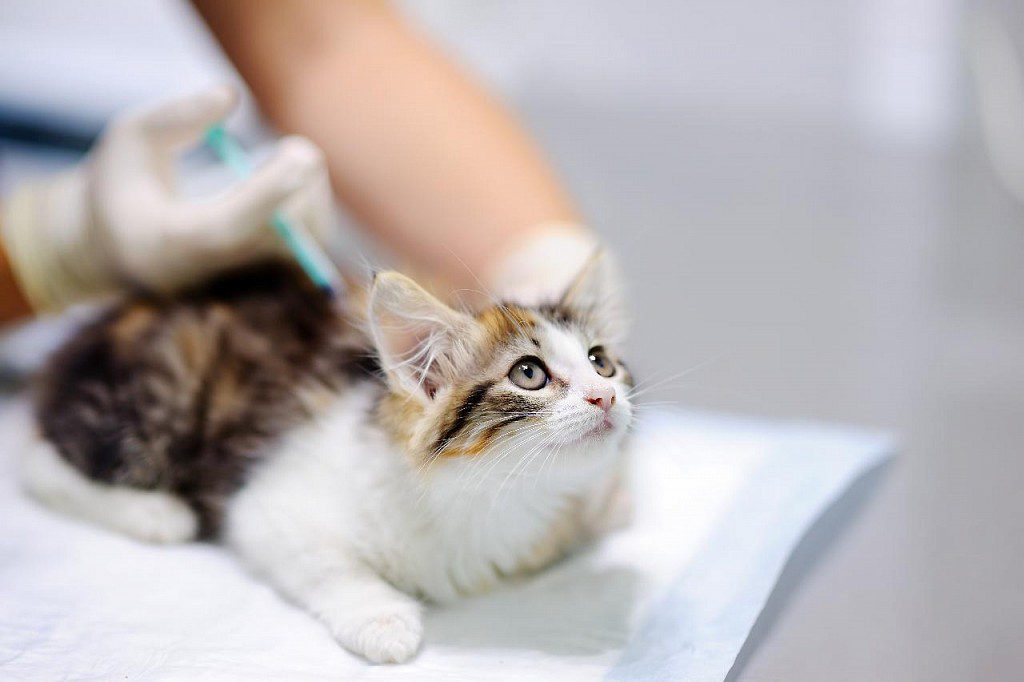 An injection to a kitten

Other diseases of kittens

Often, kittens have symptoms that are characteristic of a variety of diseases. And in this case, you can not do without the help of a specialist.

A fairly common violation, which, most often, is a consequence of existing pathologies. Signs of anemia:

The causes of anemia are varied, some of them are life-threatening, so a mandatory medical examination and diagnosis is required. It is unacceptable to treat anemia in kittens on your own with iron preparations!

Diseases associated with the condition of the skin and coat of a kitten also have a lot of reasons. Problems arise from poor nutrition, external and internal parasites, changes in the composition of the blood, fungal infections, as well as due to genetic predisposition and allergies.

If the kitten has symptoms such as itching, redness, dryness, peeling of the skin, loss, fading of the coat, the animal needs to be examined. Diagnosis may include laboratory and hardware methods.

Causes of impaired bowel movements (diarrhea or constipation) may be associated with the following factors:

Sometimes stool disorders are accompanied by an upset intestine, digestion. At the same time, rumbling in the abdomen, bloating, increased gas formation, refusal to eat, pain, vomiting, and anxiety are observed.

If the owner is sure of the cause of the disorder, for example, this is a change in food, you can try to eliminate the symptoms yourself. It must be remembered that many diseases in kittens have a rapid development, and without an ambulance lead to the death of animals. A pet may experience intestinal obstruction, peritonitis, a dangerous viral disease. It is best to play it safe, show the baby to the doctor, take tests.

To prevent common diseases in kittens, it is enough to remember just four rules.

If there are several animals in the house, during the illness of one of them, the rest need to be carried out preventive treatments. Even if this disease is not transmitted, pets can “keep” the pathogens on themselves or become their carriers. 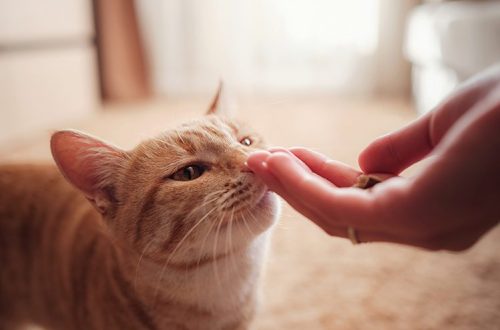 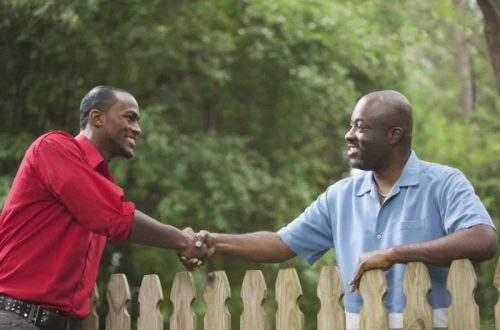 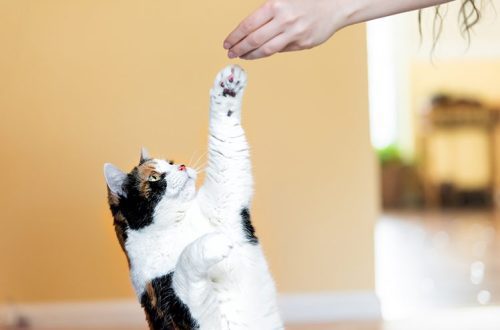