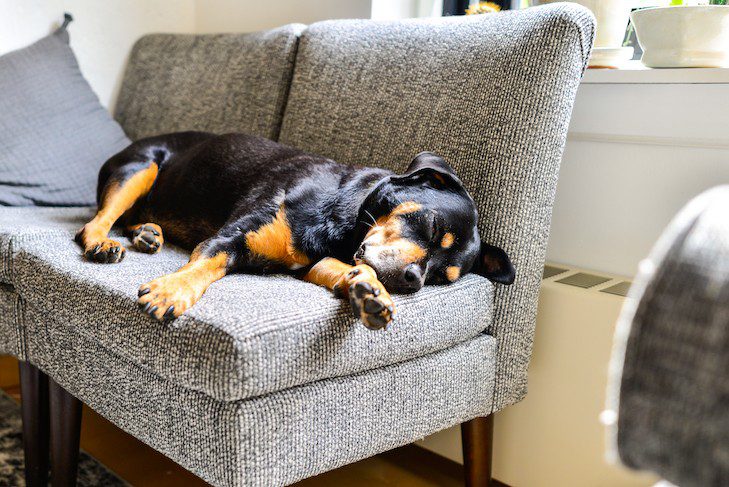 7 reasons why your dog shakes in his sleep

There are several reasons for these symptoms. Sometimes movements in a dream are observed in an absolutely healthy pet, but sometimes they can be a symptom of a serious pathology. Below we will look at why a dog twitches in a dream, and for what reasons a visit to a veterinarian is indispensable.

The first reason why pets can move in their sleep is completely normal. They, like people, have dreams. In their sleep, they can run through the fields, hunt or play. In this case, the dog’s body can react by imitating the desired movements.

There are two phases of sleep: deep, non-REM sleep and light, REM sleep.

Healthy physiological sleep is cyclical. The phases alternate, and in each of them certain processes take place in the dog’s brain.

In the phase of slow sleep, the activity of all parts of the brain is significantly reduced, the frequency of nerve impulses and the threshold of excitability to various external stimuli are reduced. In this phase, the animal is as motionless as possible, it is more difficult to wake it up.

In the phase of REM sleep, on the contrary, there is an increase in the activity of many parts of the brain, the speed of the physiological and metabolic processes of the body increases: the frequency of respiratory movements, the rhythm of the heartbeat.

In this phase, animals have dreams – figurative representations of situations that are perceived as reality.

Owners can see the dog barking in its sleep and twitching. There may be movements of the eyeball under closed or half-closed eyelids, twitching of the ears.

After severe stressful situations, the ratio of sleep phases changes, the duration of the fast phase increases. Consequently, the dog twitches its paws more often during sleep. But this is not a cause for concern.

How to distinguish these sleep episodes from seizures?

With an increase or decrease in the body temperature of the animal, tremors may be observed. Visually, owners can see that the dog is shaking in their sleep.

The cause of a change in body temperature may be fever during an infectious process, heat stroke, severe hypothermia. It is important to assess the temperature of the environment, the surface on which the dog sleeps.

Small and smooth-haired dog breeds, such as toy terriers, chihuahuas, Chinese crested, Italian greyhounds, dachshunds and others, are more sensitive to cold. It is worth considering this when choosing a place to sleep and bedding for your pet.

If the trembling does not go away or gets worse, and in

historiaThe totality of information received by the veterinarian from the guardians of the animal there was a risk of overheating or hypothermia, you should immediately contact the clinic.

Additional symptoms of a severe violation of heat transfer can be lethargy, apathy, refusal to feed, changes in the frequency of respiratory movements and pulse, changes in the color and moisture of the mucous membranes. Information from the owner is very important for making a diagnosis – where and in what conditions the animal was, whether there was a risk of overheating or hypothermia. This may require a diagnosis that excludes other pathologies. Therapy is most often symptomatic, aimed at normalizing the water-salt balance of the body and the general condition of the animal.

Overheating and hypothermia can be prevented by observing the temperature and humidity regime, especially in hot and very cold weather.

One of the most common causes of trembling is pain. During sleep, muscles relax, control decreases

moottorimoottori functions, susceptibility to internal processes and reactions increases. Because of this, the sensitivity to pain in a particular organ is increased, the external manifestations of pain in a dream can be more noticeable than in the waking state.

A manifestation of pain syndrome can be tremor, muscle spasms, difficulty in assuming a posture, and frequent changes in it.

In such situations, changes in sleep behavior appear suddenly, or progress slowly over several days, or occur regularly over a long period of time.

Often in such cases, changes are also noticeable during wakefulness: a decrease in activity, appetite, refusal of habitual actions, lameness, a constrained posture.

The causes of pain syndrome can be various orthopedic and neurological pathologies, diseases of internal organs and systemic pathologies.

If you suspect the presence of a pain syndrome, you should contact a specialist, additional diagnostics may be required: blood tests, ultrasound, x-rays, MRI.

Pain syndrome can cause a variety of diseases. Symptomatic analgesic therapy, a special treatment aimed at eliminating the cause, will be required. Some pathologies may require surgical treatment or inpatient care.

Some chemicals can lead to damage to the nervous tissues of the brain, disruption of the function of neuromuscular endings, causing convulsions in animals.

Substances that can cause poisoning include drugs (including Isoniazid), vegetable poisons, salts of heavy metals, theobromine (contained, for example, in dark chocolate).

The animal has tremors and convulsions. Often this is accompanied by salivation, involuntary urination and defecation. These symptoms, as a rule, appear in a dog and in a state of consciousness.

If poisoning is suspected, an urgent need to contact the clinic. If you know what poisoned the dog, tell the doctor about it.

At home, you can first give your pet absorbent drugs. For isoniazid poisoning, an urgent injection of vitamin B6 is recommended.

As a preventive measure, it is worth keeping medications, household chemicals, cosmetics in places inaccessible to the dog, as well as walking in a muzzle if the animal tends to pick up garbage on the street.

For some infectious and

invasive diseasesA group of diseases caused by parasites of animal origin (helminths, arthropods, protozoa) sleep apnea may occur. With clostridium and botulism, intoxication of the body occurs neurotoxinamiaPoisons that destroy the cells of the nervous tissue of the body. Canine distemper, leptospirosis, toxoplasmosis, echinococcosis can occur with damage to the nervous system. All this can be manifested by tremors and convulsions.

If an infection is suspected in an animal, body temperature should be measured. With an increase in temperature above 39,5 degrees, as well as with the development of convulsive symptoms that continue with awakening, you should immediately contact the clinic.

Infectious diseases require special drug therapy under the supervision of a specialist. In severe cases, hospitalization may be required.

Metabolic disorders can also lead to seizures during sleep. A strong increase or decrease in the level of glucose, some minerals (potassium, calcium, sodium) can cause a violation of neuromuscular conduction. The dog may begin to twitch in its sleep as if it is having a seizure.

To identify this group of disorders requires clinical diagnosis, blood tests, assessment of nutrition and lifestyle.

The appearance of seizures due to metabolic disorders most often indicates the severity of the problem, the urgent correction of the diet and the need to start treatment.

Drug therapy is aimed at restoring the balance of trace elements in the body,

pathogeneticA method of therapy aimed at eliminating and reducing the mechanisms of disease development and symptomatic therapy of complications and clinical manifestations of the disease.

Changes in muscle tone, the appearance of tremors and seizures are a common clinical manifestation of neurological pathology.

If you suspect a neurological problem, you should immediately contact a specialist. If the symptoms appear intermittently, for example, only during sleep, it is worth preparing to receive a video. Additional diagnostic methods, such as CT or MRI, may be required for detection.

electroneuromyographyA research method that allows you to determine the ability of muscles to contract and the state of the nervous system.

Depending on the established pathology, various treatment may be required: from surgery to long-term (sometimes lifelong) drug therapy.

Why does a puppy twitch in its sleep?

Compared to adult dogs, puppies are in REM sleep. Until 16 weeks of age, this phase takes up to 90% of the total sleep time.

If the puppy is twitching and shaking in his sleep, you should try to wake him up. The dreams that animals see are vivid and realistic, it may take some time for the baby to come to his senses and understand what is happening. With a sharp awakening, the puppy may not immediately feel the difference between sleep and reality: accidentally bite, continuing his imaginary hunt, shake his head, try to run further. In this case, the animal should come to its senses within a few seconds.

If the puppy does not wake up for a long time, such attacks are periodically repeated, this behavior also manifests itself during wakefulness, it is worth going to a specialist and looking for the cause. To facilitate diagnosis, it is required to film an attack on video, record their duration and frequency.

The dog twitches in a dream – the main thing 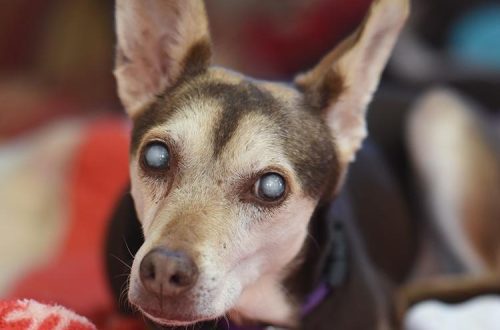 Cataracts in Dogs – Signs and Treatment 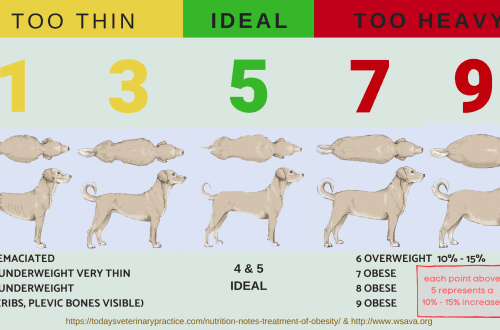 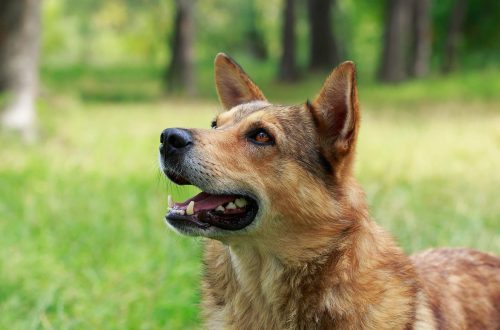 Why does a dog’s jaw shake?