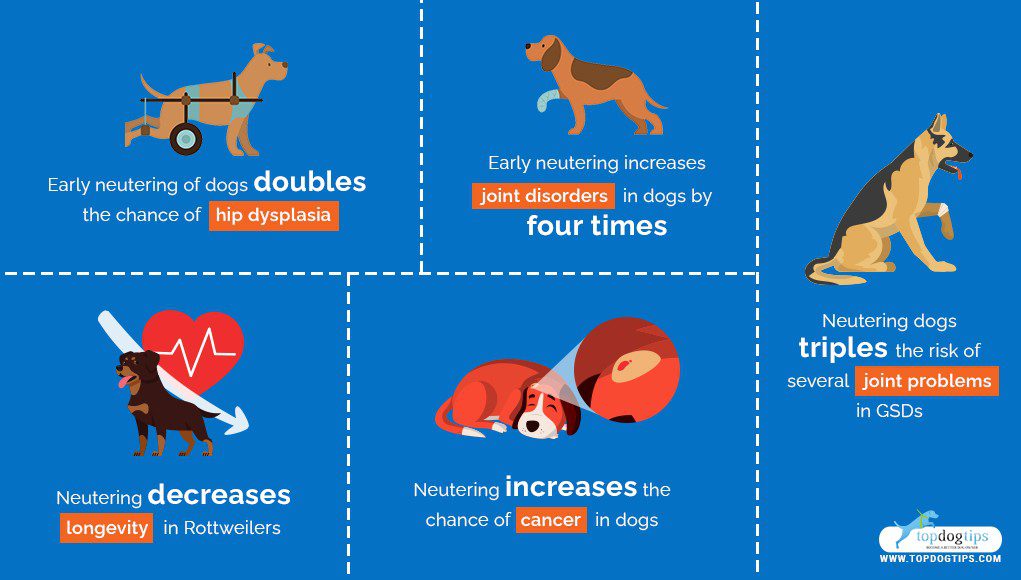 First, let’s understand what is castration of a dog, and how it differs from sterilization. Usually, people who have never had a cat or dog believe that castration is a “male” operation, and sterilization is a “female”. However, these procedures differ not depending on the sex of the animal, but according to the principle of implementation.

Why castrate a dog

As we found out, the castration of a dog means the removal of the reproductive organs in an animal of any sex. But why is this operation necessary? And why can’t we limit ourselves to sterilization?

Veterinarians recommend neutering bitches and males in some cases.

Thus, castration of dogs solves problems that cannot be solved with the help of spaying. Experts recommend spaying all bitches from whom it is not planned to produce offspring, and if there are indications, it is necessary to castrate them. With regard to males, it is worth focusing on the health, behavior and lifestyle of dogs, castration is carried out selectively.

The positive aspects of castrating a dog are as follows:

Castration of a dog leads to a change in hormonal levels and may have side effects:

What is the optimal age for a dog to be castrated?

It is best to castrate a dog shortly after puberty. In this regard, the ideal age for castration varies depending on the breed and health of the individual dog. In miniature pets, weighing up to 10 kg, puberty occurs at 5-8 months of age, in representatives of medium and large breeds – from 8 months to 1 year, in giants this interval reaches 2 years. At what age to castrate your dog, the veterinarian will tell you after examining the animal.

Important: castration of a dog for medical reasons is carried out regardless of its age.

Choosing the optimal time for castration really makes sense, if possible. An operation performed too early can lead to abnormal development of the puppy and problems with the genitourinary system. If a male or female has been castrated in adulthood, it is often not necessary to count on improving their behavior, since the habits have long been rooted. In addition, older dogs are more difficult to tolerate anesthesia and recover longer than their younger relatives. Animals 8 years of age and older are usually castrated for medical reasons only.

Note: veterinary practice in Russia and Europe is different. In EU countries, puppies who are less than 2 months old can be castrated. However, domestic veterinarians recommend waiting at least 6 months of age.

Before the operation, the veterinarian examines the dog to rule out possible contraindications. The main factors influencing the decision to castrate an animal:

Please note that self-respecting experts will not undertake to castrate the dog on the day of treatment. In the clinic, the animal must take blood and urine for analysis, make an ultrasound diagnosis of internal organs, and check the functioning of the heart. The preparatory period will not require any special procedures, but nevertheless, you should take it seriously and follow the recommendations.

It is important that the dog’s body is free of parasites. Even if your pet does not have obvious signs of the presence of internal or external pests, as part of the preparation for castration, you need to carry out prophylaxis against worms, fleas and ticks.

After getting rid of the parasites, the missing vaccinations are given to the dogs. Make sure your pet is vaccinated against rabies, plague, parvovirus enteritis, hepatitis, parainfluenza, piroplasmosis, leptospirosis, microsporia and trichophytosis.

When there are a few days left before castration, the dog must adhere to proper nutrition. Pets are transferred to light food. Diet dry foods or natural foods are suitable – lean meat and fish, vegetables, dairy products. Cereals are minimized, fatty and starchy foods are strictly prohibited.

The day before castration

Do a general cleaning of the house – the animal should recover from the operation in cleanliness and comfort. Don’t forget to dust and mop the floors with a disinfectant.

Pack your bag to the clinic in the evening. The standard list of things: carrying, bedding, paper napkins, antiseptic and a special collar. Check with your veterinarian in advance for the name of a suitable antiseptic, and it is also possible that some of the items listed will be given to you on the spot.

Stay positive and take good care of your pet!

How is the castration of a male

Let’s start with the males, as males are castrated more often than females. The operation is performed under general anesthesia and lasts no more than 10 minutes. First, the hair in the lower abdomen and inguinal region is shaved, the surface is treated with an antiseptic. Then 2 small incisions are made in the skin, through which the testicles are removed. Wounds are disinfected, sprinkled with tricillin, sutured with absorbable threads and closed with a bandage. The stitches heal in 3-4 days, the recovery period is easy. You can talk about complete rehabilitation in 3-4 weeks.

Large dogs are usually neutered at the clinic, while small dogs can be operated on at home.

How is the castration of a bitch

Castration of a bitch is more difficult and takes more time. The operation is performed under general anesthesia and takes 30 minutes. The hair on the dog’s belly is shaved, the skin area is treated with an antiseptic, an incision is made in the lower part to remove the ovaries (sometimes the uterus is also removed). The wound is treated, a double suture is applied to it, which is closed with a bandage.

Castration of a bitch is an abdominal operation that should only be carried out in a veterinary clinic. The presence of qualified specialists and specialized equipment minimizes the likelihood of critical situations.

An alternative to surgery is the so-called chemical castration. This method is reversible and consists in administering a drug (capsule) to the dog that affects reproductive function. The production of sex hormones stops after a month. The effect lasts from 6 months to a year.

Chemical castration can be recommended for animals with intolerance to anesthetics, weak immunity, as well as dogs of hunting, service and guard breeds to improve working qualities.

After the expiration of the drug, or the removal of the capsule, the childbearing function is restored. Chemical castration does not give a guaranteed 100% result and is expensive, so it is almost never used in Russia.

As soon as the dog recovers from anesthesia, it can be taken home, in the absence of complications. The most important thing that a pet needs after castration is care and peace. For a while, refuse to receive guests and visit crowded places, give the dog maximum attention. If suppuration or suture separation occurs, or any alarming symptoms are observed, contact your veterinarian immediately.

Take care in advance of organizing a warm place for a neutered dog. If the animal lives on the street, it is advisable to temporarily take it into the house. So the likelihood of infection will be significantly lower.

In the first hours after recovering from anesthesia, the dog can be given a small amount of water to drink. Do not feed the animal, as it is difficult for him to swallow and may vomit after anesthesia.

If the dog has peed after castration, in no case do not scold him – this is normal in the first 12 hours after the operation. When the dog finally wakes up, you can go for a mini-walk so that he relieves himself.

After 4 hours, the dog can be offered some food, but do not be alarmed if the pet refuses to eat. Appetite may be absent for 1-2 days.

In the first days after castration, watch the seam. If the dog licks or gnaws at the wound, you need to put a protective collar around his neck.

Usually, after castration, it is necessary to give the animal antibiotics and treat the suture with an antiseptic. Follow your veterinarian’s recommendations.

One week after castration

About a week after the operation, the dog should be brought for a follow-up examination to a specialist.

If non-absorbable threads were used during castration, then on the 10th day you need to come to remove the stitches.

So, the most responsible period of time is behind us. Continue to monitor the pet, provide the dog with a “light mode” – do not overload with training, active games, long runs, swimming.

How much does it cost to castrate a dog

The cost of castration depends on the weight and gender of the dog, as well as on the city where the operation will be carried out, and the “hype” of the veterinary clinic. Prices vary significantly between public and private institutions. The cost of the operation includes the price of drugs, anesthesia and related materials.

There are two main points in pricing: 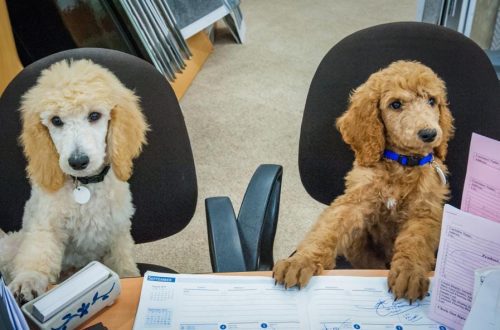 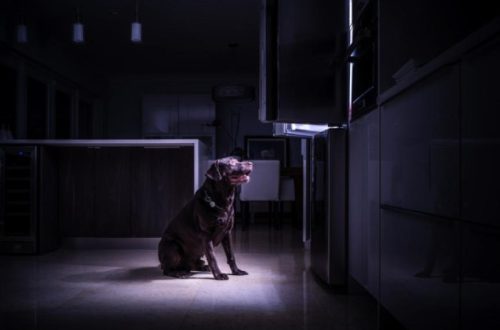 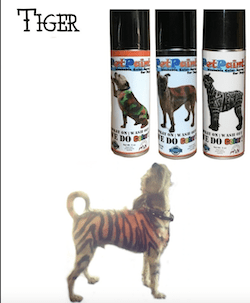 Safe paint for dogs: does it exist?