How to teach your dog to sit!

In the process of teaching the dog the command “Sit!” conditioned and unconditioned stimuli are used. The first group includes verbal order-command and gesture, the second group includes mechanical and food stimuli. Mechanical stimulation is manifested in stroking, pressing on the lower back of the animal with the palm of the hand, jerking the leash with different strengths; food – in the incentive treat of various types of delicacies.

You can teach your dog to sit solely with food, or by turning only to mechanical action. A combined method of training is also practiced, it is called contrast. Each option has its pros and cons.

Command “Sit!” considered one of the fundamental in dog training

Training exclusively with the help of treats increases the activity of the animal and develops positive emotions in it, which are subsequently associated with the execution of this command. In most cases, it is difficult to do without this technique at the initial stages of training.

Sitting a pet only with the help of mechanical action reinforces its submission, develops the ability to execute a command without tasty encouragement. It, by the way, in some cases may not interest the animal. This situation happens, for example, when a trained dog reacts too emotionally to fellow tribesmen during group lessons or is distracted by extraneous stimuli.

Teaching the command “Sit!” with the help of a combined (contrasting) effect, it will develop in your pet a willingness to obey without fear and resistance. Experts believe that the skill formed on the basis of the contrast method is the most stable.

Dogs of different breeds respond differently to the application of teaching methods to the “Sit!” command. So, for example, active and fidgety Giant Schnauzers or Dobermans resist when they try to apply mechanical action to them with their hands, pressing on the sacrum. And calm and good-natured Newfoundlands, Bernese Mountain Dogs, St. Bernards are completely indifferent to such an action. The dog’s response to mechanical stress also depends on its muscle tone. The pliable, “soft” dogs include, for example, the Golden Retriever, while the Dobermans and Ridgebacks belong to the tense ones.

Many pets are very greedy for treats, often such dogs are called food workers. They easily execute the command “Sit!” in the hope of receiving the coveted treat. The main thing is not to let them snatch a tidbit prematurely. Taste-promoting technique is very effective in training puppies and overly vicious dogs. However, some animals are quite indifferent to rewarding goodies, for them the best reward is the praise of the owner.

At what age should you teach your dog to the “Sit” command?

Command “Sit!” the puppy may well begin to master when he crosses the 3-month age limit. Usually, at this tender age, well-bred dogs are already familiar with the commands “Come to me!”, “Place!”, “Next!”, “Lie down!”.

The purpose of the puppy’s initial mastery of the command “Sit!” is not that he learned to immediately and masterfully execute the command. In childhood, the dog just needs to learn how to respond correctly to the owner’s demand. Over time, the acquired skill will be fixed.

Puppies are trained using food. When learning a lesson with a dog, you can lightly hold him by the collar. Mechanical influences (pressing with the palm, pulling the leash, jerking the leash) are applicable only in relation to an already physically strengthened animal. Training according to strict rules is carried out after the dog is six months old.

How to teach your dog the sit command

Teaching the dog the “Sit” command occurs in stages and under different conditions. His goal is to ensure that the dog unquestioningly obeys the order at home and on the street, next to the owner and at a distance, on a leash and in a free run.

Call the puppy by calling his name. The dog should come and stand at your left foot. Bring your right palm, in which you will hold the tidbit, to his muzzle, let him sniff the incentive prize. Then, confidently commanding “Sit!”, Slowly raise your hand up so that the treat is above the baby’s head, a little behind. Without taking his eyes off the seductive object and trying to get close to him, the puppy will most likely lift his head up and sit down. 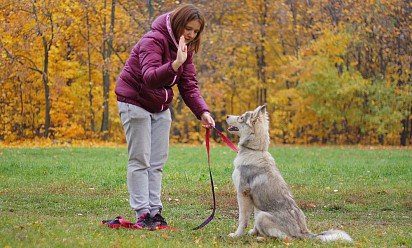 Command “Sit!” served with the right hand: the arm bent at a right angle in the elbow joint is set aside, the palm should be open, located straight.

If the dog takes more active steps in the hope of getting closer to your palm, hold him by the collar, not allowing him to jump. Get him to raise his head and sit down. As soon as the dog sits down, even if unevenly and uncertainly, encourage him with the words – “Good!”, “Well done!”, Stroke and give out a delicious prize. Making short pauses, duplicate the lesson 3-4 times.

After your pet has formed the rudimentary skills of executing the command “Sit!” within the walls of the house, you can safely start practicing the team on the street. Find a quiet corner where your puppy won’t get distracted.

As soon as your four-legged friend turns 6-8 months old, you should start practicing the “Sit!” command. on a short leash. Having placed the dog at the left leg and turning halfway towards him, with your right hand hold the leash 15 cm from the collar. Your left hand should rest on the loin of the animal, touching the sacrum, thumb pointing towards you. After ordering the dog to sit, press the left hand on the lower back, at the same time pulling the leash up and slightly back with the right hand. Having achieved the desired result from your pet, cheer him up with the words “Good!”, “Well done!”, Caress, reward with a treat. The lesson is duplicated 3-4 times, making approximately five-minute pauses.

Having fixed the completed stage of teaching the pet the “Sit!” command, start practicing this skill at a distance of several steps. Position the dog in front of you at 2-2,5 meters, keeping it on a leash. Attracting the attention of the animal, call him and command: “Sit!”. As soon as the dog perfectly executes the command, as in the previous stages of training, encourage him verbally, treat him with delicious treats, stroke him. Repeat the lesson 3-4 times with short time intervals.

If your pet ignores the command “Sit!” at a distance, duplicate the order underlined strictly. If this does not work, approach the pet, again sternly tell him to sit down, with your left hand press on the lower back, with your right hand – pull the leash up and slightly back, forcing the rebel to obey. Again move away at the same distance, turn to the negligent student and repeat the command.

The dog should sit for 5-7 seconds. After their expiration, you need to approach him or call him to you, encourage him, then let him go, commanding: “Walk!”. If he jumps up before the specified time and rushes to you without permission, immediately deliver him on a leash to his original place and duplicate the exercise.

After the dog has masterfully mastered the command “Sit!”, located at a distance of up to three meters from you, the distance should be increased by lowering the pet off the leash. In the process of training, seating the dog, it is necessary to systematically change the distance separating you. However, no matter how far away the dog is from you, you need to approach him every time after showing him a good result, and encourage him with a word, affection or treat. This is extremely important so that the dog does not lose a sense of the significance of the command given to him, depending on whether he is in close proximity to you or at a distance.

Teaching the command “Sit!” by gesture 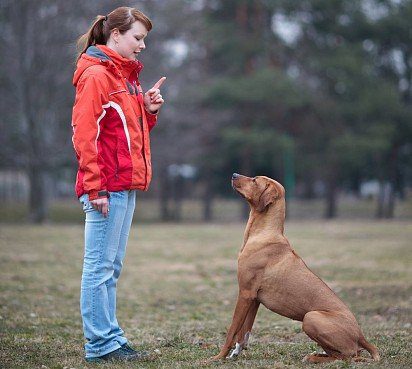 With a correctly executed command, the head is raised high, the animal should look either forward or at the owner

After the dog acquires the initial skills in executing the “Sit!” command given by voice, it is advisable to start reinforcing the order with a gesture. The dog should be located opposite the owner, approximately two steps away. Beforehand, you should turn the collar with a leash with a carabiner down. Holding the leash in your left hand, pull it slightly. Quickly move your right arm bent at the elbow, lift it up, opening your palm, and command: “Sit!”. A well-executed team, of course, will require a traditional reward.

The gesture used when landing can be not only a raised palm, but also a finger. In this case, the delicacy is held with the thumb and middle fingers, while pointing the index finger up.

In the future, you should seat the pet, synchronously using a verbal command and gesture. However, periodically duplicating each other commands must be separated, that is, the order must be given only by word or only by gesture.

According to the standard, a skill can be described as developed if the dog instantly, without hesitation, sits down from various positions at the first command and gesture of the owner, being 15 meters away from him. It must remain in this position for at least 15 seconds.

What not to do while studying

When choosing a playground for outdoor activities, make sure that it is clean around, there are no objects that could injure the dog. Forcing a pet to sit on dirty, wet or even damp ground should not be.

Command “Sit!” Serve in commanding intonation, but calmly. When you repeatedly demand to execute an unexecuted command, the tone should be changed to an increased, more insistent one. However, avoid scandalous notes or shades of threat in your voice. Encouraging words should contain affectionate notes.

As the dog’s more confident, habitual execution of the command “Sit!” the number of treats as a reward should be reduced. Praise the same dog, stroking him for an impeccably executed command should always be.

Each execution of the “Sit!” should end with a reward and another command, the dog is not allowed to jump up arbitrarily. After the dog executes the command “Sit!” and subsequent praise, pause for 5 seconds and give another command, such as “Lie down!” or “Stop!”. 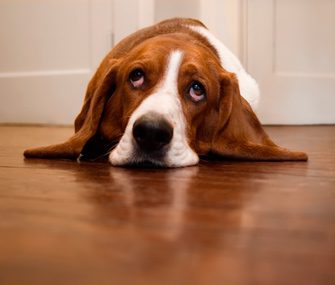 Why does the dog look sad 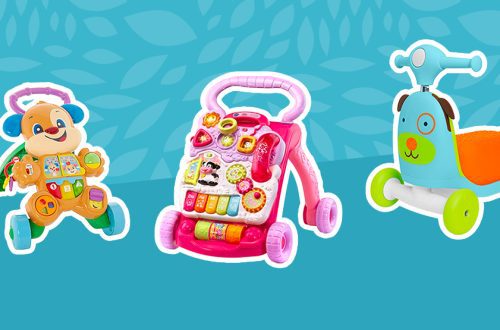 Overview of toys for walking 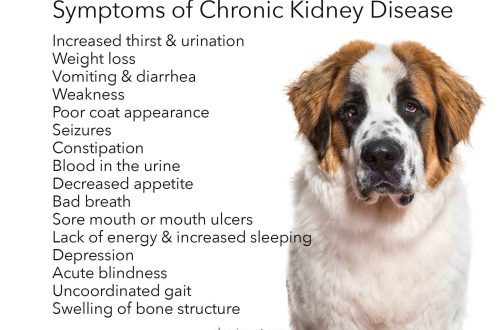 Facts About Kidney Disease in Dogs